So I think that maybe on this long and whining—oops...I mean winding—road, I've gotten people confused about what's happening. Here I will try to sum it all up and make it as clear as possible (which is hard to do since I don't totally get it myself).

•We received our referral on September 21, 2007.
•We accepted on September 24.
•We went through all of the paperwork craziness for a month and our file was sent to Taiwan and arrived on October 26th, 2007.
In my head, we were logged in the first week of November.

•Weeks went by and we got a call mid-December (maybe the 18th? it's somewhere in the archives of long-ago posts). They told us that because Lucy's birth mother had passed away after giving her up, it was no longer legally binding and they had to have a family member sign to become her guardian and give her up. We were told this would happen within a week or two. We then decided to let go of any hope until after the first of the year.

•Sometime in late January, the birth mother's sister came forward to sign. We discovered it's because the biological grandparents are so selfish and self-involved that they couldn't put their granddaughter ahead of their hatred of each other and go to the courts at the same time to sign.*

•We got a call in late March that told us that a social worker had paid a visit to SLC to talk to the director. We were told that this was a crucial step and that the guardianship was held up until this had occurred and now things were moving.

•When I visited in early May, we were waiting for word that the guardianship case was done. That word never came.

•Last week, I was told that a first ruling is expected next week (that would be the week of 5/26) and we would wait for a final ruling on the guardianship case. In adoption cases, the final ruling is after a ten day waiting period. I don't know if it's the same with guardianship cases. After the final ruling, the biological aunt would be registered as the guardian and then our file would be sent to the court. So if we did the math and were a bit realistic... we could hope that our file is in court in the beginning of July (as opposed to early November last year as I so naively thought).

So... adoption cases are said to be 4-7 mos. I've seen some get rulings within two weeks and some wait six months. BEST case scenario (at least the way it looks) is that we would travel in August. Worst case scenario would be next year in February or March. If it turns out to be the latter, perhaps one of you could go pick her up for us and bring her directly to the insane asylum where Jeff, the boys and I will be residing. I'll be the one in the straight jacket. 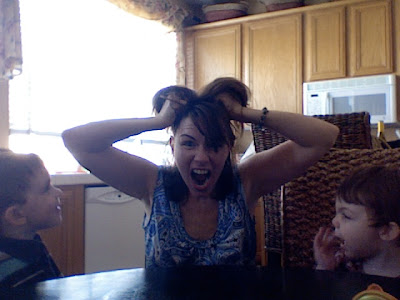 Whined by JackieMacD at 8:44 PM

Jackie,
That is so wrong and messed up!!!!!! I'm getting so bitter and beyond mad about Lucy not being able to come home! This sucks!!!!
Megan

Whine away, I certainly think if anyone deserves to you do. I really don't know how you've been able to keep it together. (during our relatively 'short' 8 month wait I went a bit postal on more than one occasion). Lucy is getting a very strong mother.
I love the picture ;)

Thanks for the explaination. WOW! I hope you are travelling soon!!! The "typical" wait is hard enough. Red tape sucks!

Oh Jackie, I am so mad that this is happening to Lucy and the rest of your family. It just seems so wrong. I thought our wait was hard but I can't imagine what you are going through. Wishing you a miracle to get Lucy really soon.

Oh man, I understand now, that really is terrible. I'm so sorry. Maybe the same judge will do both cases and the 2nd one will be done really fast?

Praying for you,
Yvonn

I loved the photo; hate the fact that you have so many reasons to feel like pulling your hair out.

Your explanation of what has gone on is very helpful. My sister-in-law was in town for Memorial Day. She had read about your situation on our blog and was asking what is happening, hoping you'd soon be joined with Lucy. I wasn't very good at explaining the guardianship thing (because it really just doesn't seem to make much sense), but now I can share your own explanation.

Oh, I hope it's going to be a good week in the Taiwan courts!

Just a quick question. How old do you have to be to adopt from Taiwan.

Im sorry about the wait. You will be in my thoughts and prayers

LOVE the pic. I love how J. is looking up at you.

I just linked to your blog from Ann's (Taiwan Treasure). What a roller coaster of a wait you've been having. I hope you get a really fast adoption process to counter-balance the much too long guardianship process.

I really liked your "song for Lucy" video.

I'm glad you outlined that. I was getting utterly confused, not that you aren't, about what is going on. It sucks major though. I hope this all get straigtened out and once you get through the guardianship issue, I hope you fly through court. Miss Lucy needs to be home...NOW!!