Once upon a time, a 23-year-old girl packed up her tiny car and drove across country with $700 to her name and a big dream in her heart—Hollywood! In her first few months in La La land, she worked some interesting jobs—answering Mickey Mouse's fan mail, getting things thrown at her by a famous and insane publicist in Beverly Hills, running up and down a mountain with an arm full of sodas for a thirsty TV crew, and answering phones at a self-help show. Thirteen years later, she finds herself writing fan mail to Mickey Mouse, getting things thrown at her by toddlers, running up and down stairs with sippy cups for thirsty kids, and answering questions that only little ones can possibly think up. Same jobs, different bosses.

I have to say all those years later, I can look back in awe at all the life experiences I've been blessed to live. After a wild and crazy decade (ah, the world as a 20-something singleton), life has settled into a different kind of crazy. The amount of life I've lived in the past thirteen years feels like enough to fill four lifetimes. 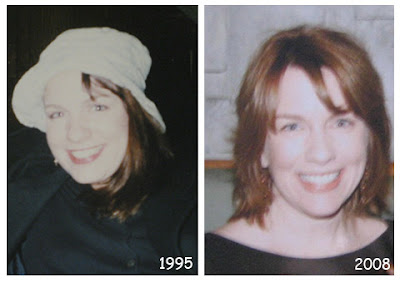 I think these photos say it all... after all these years, I am still the same person (although it seems much blurrier) but with a less black and white, I-know-how-the-world-works attitude. And instead of that restless girl constantly wondering and dreaming about the future, my wrinkles and I are much more content with living in the now. And that, my friends, is progress.
Whined by JackieMacD at 2:47 PM

Jackie,
You are awesome and have not lost a step over the years!
XOXO,
Megan

And you look fabulous! Very cute post. The fringe benefits of this job are a lot better!

i knew you were a cool chick!

Jackie,
Yet again you are right. Most want the Unicorns and the rainbows, and real life unfortunately doesn't provide those in most scenarios. Set all leprechauns aside and REAL people like you and I get this. We understand that carebears are NOT reality but sopranos is probably closer to reality than we would like to know...lol. Let them pick, there's a log in most other's eyes anyways..lol.
You look as fab today as you did in 1995 chickie! AND Your guts and sense of humor is why I read your writings! So you go girl!! I don't need no stinkin' Unicorns...lol.