And the Winner is...

In the first-ever Taiwan Lucy caption contest... Papa takes the cake...or, uh lollipop by just one vote! Julie (my little sis), Barbara (a childhood friend) and Pam (my sis-in-law) were tied for second place. As I said in the original post, the winner would be featured—so here we go! 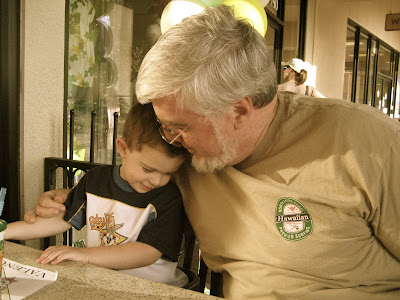 Papa was originally called Grandpa but when J first began to talk, he pronounced it 'papa.'

Although they've lived in Northern California for 40+ years, both Papa and Grandma grew up in Massachusetts—which is probably why I like them so much.

After spending time in the Navy, Papa worked for IBM before the PC was even invented.

Papa can make me laugh without saying a word—not many people can do that.

And, if a woman can tell how her husband will love her through the years by witnessing his father's actions... I have a lot to look forward to.
Whined by JackieMacD at 7:15 AM