If I could sum up my parenting fail in a word, it would have to be -- FOOD.

When Jacob was almost a year old, we thought it would be so cute to get him his very first "kid's meal." That Sunday afternoon move may have been one of my biggest mistakes -- ever. I have spent every day since bribing, threatening, begging and bargaining, hoping my five-year-old would just eat a meal that wasn't shaped like a dinosaur, covered in pepperoni or come in a color not found in nature. When I do get him to try something, it often ends up in a gag/vomit combo that leaves me on my hands and knees wiping up food that looks nothing like the treats meal I had prepared.

Our four-year-old is a big time meat and potatoes man -- hold the potatoes. He'll eat the meatball portion of spaghetti and meatballs, chicken nuggets, and pepperoni pizza, with a little mac and cheese thrown in for good measure. While most people would find living four months with no kitchen would be unimaginable, as long as we had a toaster over and microwave, they couldn't have been happier.

The funny thing is that I really do subscribe to the "two things on the menu" principle -- take it or leave it. And if I didn't have a 6'4" baby who was the king of all picky eaters, I'd be all over that. I find myself feeling defeated before I even turn the stove on. The only thing that keeps me from moving into the local McDonald's is knowing that Lucy will at least try 75% of what I cook. It's fun to share fruits and veggies with at least one normal-eating person. 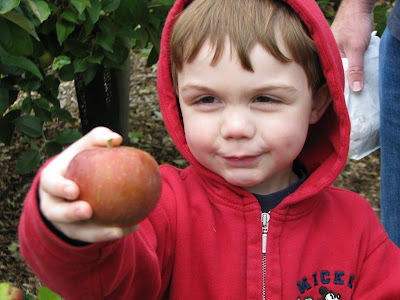 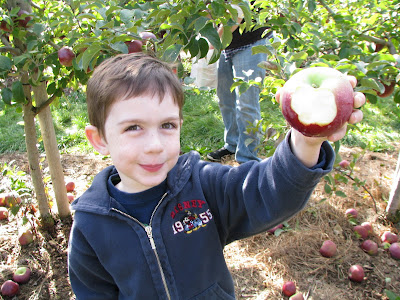 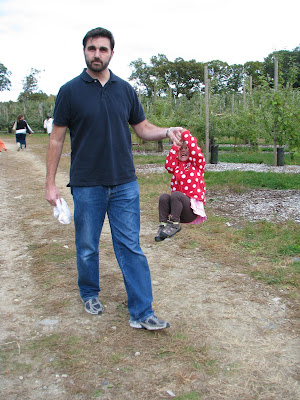 But things are looking up. On our fall vacation back east, we had the chance to go apple picking. I had very low expectations that the day would be anything other than a hay ride and photo op for some gorgeous fall foliage. But picking apples proved to pique the curiosity of one of my stubborn food men (and his dad). Watching Jacob bite into apple after apple -- even when he would randomly spit some of it out -- made my heart swell with pride. (Baby steps, right?) And (as you can see above), when we tired of apple picking, there was still Lucy picking to be had. She like to do her best impression of a hanging apple on Daddy's arm, the hay ride, and anywhere else she could dangle from.

I jumped on the apple-bandwagon and decided to try something else -- dumplings. We watch a video called Culture Cubs that has taught the kids not only some vocabulary in Chinese (hearing them name fruits in Mandarin is just too cute), but has introduced new foods and art. And since our little dumplings watch the kids in the video eat dumplings over and over again, a little experiment was in order. So the other night, I announced we were making dumplings and turned on the video. It was brilliant. Dinner became an event, with each of the kids grabbing their chop sticks and chowing down on pot stickers. I couldn't even believe what I was seeing. Jacob, famous for throwing down in the middle of a Chinese restaurant because he doesn't like anything, was now shoving pot sticker after pot sticker down his throat -- eating a total of five! Brady was even dipping them in sauce!

I know that the food battle is far from over. But it's important to celebrate the mini-victories as they come. And while tomorrow is more likely to be sandwiches over sushi, we're one step closer to tossing out the kids' menu.

What do you get your kids to eat?
Whined by JackieMacD at 1:21 PM