I've always been a fan of Earth, Wind & Fire's catchy tune, September. But two years ago, the song became a kind of anthem for us; the back drop of our overwhelming elation, emotion and eagerness to meet the little girl who would become our daughter.

Do you remember the 21st night of September?
Love was changing the minds of pretenders
While chasing the clouds away

September 21, 2007
The day we saw Lucy's face (via photographs) for the very first time. I remember the meeting at our adoption agency like it happened last week. We arrived to hear about a potential match, so determined to be logical, refusing to see her photo until we had all the facts and could make an educated decision. We wanted to be sure we considered everything, making the right choice for her and our boys. We thought that if we had seen her photo, all reasoning would go out the window and we wouldn't be able to think clearly.

We were half right.

After seeing her photo, there was no way we could even consider that she wasn't our little girl. She looked exactly the way I had imagined her. But it was actually hours before, when we got the initial call, that we knew there was no turning back. I can vividly recall standing in the hallway on the 10th floor of my office building (the same floor I was on when Jeff proposed), listening to the story of the girl I was positive was our daughter. As soon as I hung up the phone with our agency, I called Jeff and blurted "they found our daughter!" The photo turned out to just be confirmation that it was, in fact, our Lucy. 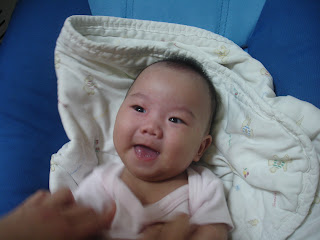 Two years later, Lucy's been home with us for a tiny bit longer than we waited for her. She's funny, smart, and has a zest for life that I've never seen in another human being -- ever. She's electricity and we're just trying to keep up with the power bill. 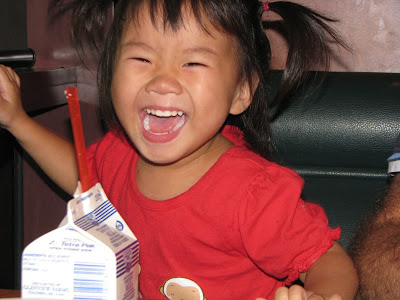 Related link: The posts from the week we first saw Lucy's face.
Whined by JackieMacD at 9:21 PM