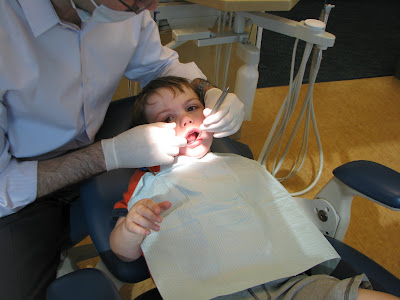 Two words that can throw an adult into a panic or, at the very least, give them a queasy feeling deep down in their gut. Just thinking about the experience... lying back in the chair, the masked doctor looming overhead, the cramping jaw, the sound of the drill... it's enough to send a person over the edge.

So why do we expect kids to be okay with it?

With big changes ahead for the Mac family, this week has been the perfect opportunity to get our affairs in order. Jacob bravely suffered through his 5-year doctor checkup -- complete with shots, a TB test and blood drawn -- before he was declared healthy enough to endure the vigorous boot camp that is kindergarten. Lucy got the thumbs up on her medical form, giving her the green light to enter the exciting world of preschool. And I had the brilliant idea to schedule the three of them a dental checkups together -- two of them for the very first time.

In preparation for the event, I pulled out a little friend we call Nemo. The DVD was meant to relax them pre-appointment as well as help me broach the subject of having their pearly whites inspected. I have to say, it wasn't the worst idea I've ever had. I was pretty pleased with the discussion, complete with promises of real fish in the tank and stickers when it was all over.

As we drove the half mile from our lovely rented apartment to the office, Brady calmly informed me that he wouldn't actually be participating but was just "going to watch." I let it slide, took a deep breath and gripped the steering wheel a little bit tighter.

You might ask why my son -- who will be four at the end of September -- has never been to the dentist. And if I gave you the honest answer, I would say it's because his mother is a coward. The idea of my strongly-opinionated son being directed to rest comfortably while opening his mouth for a complete stranger to take a look... that held no appeal for me. And I truly believed that the effort would be wasted. If I can't force him to try certain foods, I certainly can't make him get his teeth cleaned, right? But it was time. I couldn't very well let him dictate whether he went or not -- I AM THE MOM HERE.

We arrive at the office and the kids fight over, I mean PLAY, with the toys while stopping every few seconds to chat with the fish in the over-sized tank. They were so cute with their new swimming friends, Brady even took to naming them Buddy and Mia after our dogs. After I filled out what felt like an hour of paperwork, we were called back to begin.

While Jacob sat for X-Rays, Brady discovered the video games. Lucy took the two-minute opportunity to sneak around and touch every possible piece of equipment, turning monitors off and eluding my grasp each time I tried to pull her off. Holding her wiggly body, screaming for me to "stop it, mommy," while coercing Jacob to hold the gag-inducing dental apparatus in his mouth long enough for the hygienist to take a picture was proving to be a challenge (They never did get the shot of his teeth).

But it was when Brady discovered that he was required to do more than watch, did the floss hit the fan.

The tantrum that ensued can only be compared to that of a bull in Pamplona. But I can assure you that those risk-taking fools in Spain would never lack the common sense it requires to subject themselves to the Running of the Brady. While I comforted my bucking bronco, his big brother moved on to get his teeth cleaned. Lucy, never missing an opening when she sees one, climbed up on another chair and began giving herself a dental exam. My apologies to the staff who had to then re-sterilize all of the equipment.

Somewhere between ten and 20 minutes later, Brady calmed down. If I didn't know better, I would think his behavior was actually a secret alliance between him and a little busy girl I know. The twinkle in her eye was proof that she was quite pleased with his ability to distract her fun-killing mommy, giving her the chance to play assistant to the dentist who was checking Jacob's teeth. I swear I saw her slip him a dollar as I turned around.

After some bribing, Brady got through his exam and cleaning. Lucy's turn was a breeze, she hopped up, opened her mouth and let Dr. Chris do his work. The dentist chair is one of many places Lucy's fearless behavior comes in handy.

After the dental chaos subsided, the kids were invited to pick from the mystery treasure chest. Jacob chose a yo-yo, Brady stood indecisively staring at the cheap 99 cents store options like they were gold and Lucy... she just wanted what Jacob had decided on, even though there were ten more of the exact same thing in the chest. Without warning, she sprints toward her brother, pulling his toy out of his hands, floppin her way through the dental office. Jacob, losing all control of himself, chases her screaming "That's MIIIIIIIIIIINE!" Here I was, trying to pay for the visit, and suddenly referring a wrestling match between the two of them.

I believe it was in that very moment when I realized I might not have control over these kids. When did it get like this?

Mean mom kicked in. The threats that seeped through my clenched teeth must have made it at least in the vicinity of their tiny brains because just then, they both stopped and quickly and quietly filed out the door.

I was shaking and sweating as we took the elevator down one floor (hey, I was NOT risking the stairs with these animals). I get them all buckled up and plop into my seat, defeated, trying to muster up the strength to deal with the situation. As if on cue, I hear a tiny happy voice from the back seat.

Oh dear, I'm so sorry, but I am indeed laughing out loud. But I also feel your pain. Glad it's over, hope the cocktail hour comes soon for you.

What a great Friday laugh! Sorry, but I sort of know your pain. I expected Peyt to be like Brady, but he ended up being like Lucy. Gracyn is and will be like Brady, oh, probably forever, and our dentist is our cousin! LOL You of all moms DO have things in control. I've seen you in action, so while you felt like you weren't, and you had to snap into "mean" mom, you were simply stern. I love the on cue comment!!! Probably made you laugh, and shake your head all at the same time while driving back to home sweet Melrose.

i am SO worried about my son's upcoming appointment at the dentist. they won't see children before 3 1/2, but he is going to be horrible. he doesn't even like to brush his teeth (to put it lightly!). by the way, i loved the "the floss hit the fan" comment, that was great.

Oh gosh- That was exactly how i felt inside at the dentist office! Sick to my stomach!! I had to get a root canal but i was pretty on the fact that simply pulling it out would be much less painful!!

At our appointment last week my 6 year old threw up in the middle of the kids examining tables while my 15 month old tried to roll in it and the therapy dog tried to eat it.Going to the dentist with kids is AWESOME!

Awww poor Mommy! I can imagine how you were feeling by the time it was all over. The profuse sweating, the shaking, the uncontrolable nerves. Big hugs Mom, you made it through!

Stopping by to give you a big welcome to the SITStahood. we are so glad you could join us and look forward to seeing you around!

Jackie - sounded like a nightmare. Its good to know that Im am not the only one sweating and losing my cool in public places. Its pretty embarrassing. I too havent taken Jason to the dentist yet for the same fear of him being uncooperative. He's not the best patient at the docs, so this should be fun when I finally make him an appointment. Thanks for sharing.

So glad others can relate! :) It's funny a few days later, it all seems so much more entertaining. Note to self: bring Jeff next time!

Hoo-boy... I feel your pain. Andrew freaks out on the same scale when we go to the dentist. With wiggly William in tow, it's pure chaos. I know the post-dental visit mean mom thing very well.