I'm getting the fireworks kicked off early by swapping blogs with Jana Matthews of The Meanest Mom. I am a huge fan not only of her hilarious and brutally honest writing, but especially of our no-holds-barred cross-country mom confession phone calls. While she dazzles us all with her knowledge of parenting multiples, adoption and Crohn's disease, it's her Ph.D. in Medieval Literature that makes her the hot mama she is.

Today, Jana's giving us a glimpse into her life (and Lucy's future). If you're looking for me, I'm discussing what life is like being THAT MOM over at The Meanest Mom.

For the past few weeks, my family has been graced with the presence of my twenty-five-year-old sister Amy, who just finished up her first year of graduate school. Among my sister's many unique attributes is the fact that she was adopted into our family from South Korea when she was an infant. 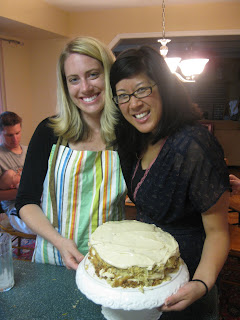 For some strange reason, an adult Asian with white parents and siblings is a concept that most people cannot seem to wrap their minds around. People are used to seeing Asian babies and toddlers with Caucasian parents, but they can't quite come to grips with the fact that these same children grow up and, when they do, they actually stay Asian.

I was reminded of how the world sees me and my sister when we were at the park the other day with my kids. I sat at the opposite end of a long picnic table occupied by a woman I didn't know, while my sister did her auntly duty of taking my boys to the bathroom for the second time in ten minutes.

"I'm thinking about getting an au pair," the woman said, leaning over to me.

"That's nice," I replied and scooted a little closer to the edge of the bench. I wasn't exactly sure why a complete stranger felt the urge to tell me this, but I felt pretty sure it wasn't because she was normal.

"She sure seems great with your kids," the woman continued, gesturing to my sister.

"She is," I stated, and began digging through my diaper bag for the vial of pepper spray I was sure I had put in there before we left.

It wasn't until the woman asked me what agency I used to secure my foreign babysitter that I realized that she thought my sister was my nanny.

When I corrected the error, the woman threw back her head and let out a loud bellow. "You two don't look anything alike!" she laughed.

A few minutes of awkward silence ensued before my sister returned and plopped herself on the bench beside me. After demanding a swig out of my water bottle, she informed me that one of my sons had urinated on the toilet seat in the public bathroom and that she refused to wipe it up. "That's your job," she reminded me and snickered.

As I dragged myself off the bench, I couldn't help but steal a glance at the woman occupying the other end. Her mouth was agape in horror at the insolence of the hired help.

It's a good thing my two other Korean siblings weren't in town as well. In particular, I can only imagine what the poor woman might have felt compelled to say or do upon overhearing my thirty-year-old brother/butler tell me to shove it when I ask him to kindly retrieve my sweater from my locked car.

Are you interested in a blog swap? Shoot me an email at jackie@thesilverwhining.com!
Whined by JackieMacD at 9:29 AM

I just love (not) how strangers feel they can say and do whatever they please when it pertains to parenting.

Oh. My. Gosh. I really do think that some people have so much stupid, the are completely incapable of keeping it contained. I'm glad you keep a good sense of humor about it!

Rebecca is Thrilled by the Thought said...

Hilarious. Well, hilarious only because you wrote it. You have a great sense of humor for this and all situations.

Oh wow...wow. Jana you crack me up everytime...or is it the other people in you life?

Your son urinated on the toilet seat? OK, that's beside the point.
I think it's hard for some people to wrap their small minds around somethings. You have a way to bring humor to life. Thanks

I have three adopted brothers. One black, one white, and one that is such a mix of everything that we have no idea. We have the BEST family pictures.
Oh, and don't get me started on the people that say, "How did that happen?"

HAHAHA! As the mom of 1 white kid and 4 black ones, these are the kinds of stories that totally make me giggle(re: your actions & sisters, not the idiot's). I am usually also intentionally obtuse about what people are asking.

Strangers like to talk to me, too, and my husband wondered aloud why that would be. I explained it is because I'm like a kitten. You just can't help but reach out and give it a pat. What I didn't tell him is that most of the strangers that tell me their secrets are mentally ill and their secrets really aren't secrets because they are mumbling them all the time.

As the first cousin of two adult KADs and the momma to one daughter whom we adopted from China, I can only shake my head at their ignorance and applaud your response.

My sister is adopted and we are always told we don't look anything alike. It is so odd that people just don't get that families are families, no matter what we look like. I love your story, it makes me feel better knowing I am not the only one who gets that line.

Our friend was adopted from S. Korea into a Sicilian family, so you can imagine the odd looks she gets when she meets someone with the same last name and starts comparing notes to see how they are related!

Such a great post. And welcome to all Jana's readers who stopped by. I don't know anyone who tells a story quite like she does.

That is funny!! I can somewhat relate to your article:
My baby sister was adopted as a newborn when I was 18 years old and I am now married with 3 kids. When I take my sister out shopping with us, people always assume that she is one of my kids and get confused when I tell them otherwise or when my daughter calls her Aunty. I have to grant them the confusion while yet I have dark hair and eyes and she has blond and green eyes, my kids are a mix of light brown and dark blond hair with dark eyes and do somewhat resemble their aunty. I do enjoy seeing their looks of concentration when they try and figure out the family placements that I have just provided them, just funny!!