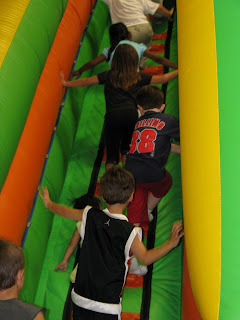 I recently posted this during my blog swap with Jana of The Meanest Mom. For those of you who missed it, here's a Sunday bonus post.

It was expected to be a hot 90-something California summer day and I wanted to show the kids a good time. Anyone could toss frisbees at the beach, build the perfect lemonade stand or spend hours playing Marco Polo in the pool. But how many kids get to be in the ventilation-challenged indoors, jammed into a giant room with 100 screaming strangers and their parents at the local play area? Scooter's Jungle - now that's what lifelong summer memories are made of.

We grabbed our socks and headed to the 90 minute free-for-all. After I signed the rock-solid insurance waiver upon entering, the staff -- barely older than the kids they are hired to supervise -- recited the rules. I didn't want to break it to them but I'm thinking if it takes me 45 minutes to get my three kids to put their shoes on, no one's listening to gum-snappin' Chelsea's words of wisdom. As we shoved our way into the play area, I felt something change... it was like the calm before the storm. Next thing I knew, the normal, rational person I like to think I am be was taken over -- by THAT MOM.

For the next hour and a half, I walked behind my kids like a crazy woman, righting every wrong, reprimanding ever misstep. But not just my kids... no one's child was safe. When the cute little 3-year-old boy came barreling down the slide with his tiny Tinkerbell doll in hand, I let him know the rules said no toys. And when the angel-faced kindergartner cut my kids in line, I made sure he knew that it wasn't cool with me. My kids couldn't wipe the grins off their faces, they were having so much fun amid the chaos. But not me. I was missing it, too busy playing Jungle Cop.

I took comfort in knowing I wasn't alone. Here I was, sandwiched between the cheerio-totin', mom jean wearin' mom on my left, who was making sure her little Suzie wasn't accidently brushed up against by the evil forces of preschoolers, and the I-haven't-missed-a-day-at-the-gym-since-1987 dad, pushing his mohawk-sportin' son to the front of the line every where he could. As I looked around I noticed we were all on the same mission, to do anything and everything we could to make sure our kids were having the time of their lives... even if it kills us.

But the jungle wasn't the first time I became THAT MOM. Recently, as I sat on the steps of a hotel swimming pool while the kids floated around me, three pubescent boys started playing an overly active game of peg-each other-in-the-head-with-a-ball. Each time the ball whizzed by, I could feel my body change, my back arch like a cat ready to take the leap. Low and behold, a few minutes later... the ball and my daughter's leg made contact. I sprang up snapping at them, "What's wrong with you, boys? Where are your parents?" It's like I turn into a cross between an elementary school principal and Serial Mom within seconds.

And I can't forget the grocery store incident. When the teen bagging my items got sassy with the middle-aged cashier, my alter ego reared her ugly head. I tried to convince myself, "Don't say anything, Jackie. It's none of your business." But could I let it go? Heck no. I had to let that boy know that his disrespect was absolutely not acceptable and he should be ashamed of himself. ASHAMED, I SAY!

Because, oh yes, I am THAT MOM.

How have you changed over the years that leaves you wondering who you've become?
Whined by JackieMacD at 1:06 PM