When Push Comes to Shove...

If there were ever two people in this world who've done a complete turnaround with each other, it's Lucy and Brady. It makes sense -- only 16 months apart, Lucy came in and took over Brady's baby spot. And Lucy -- who was one of the older kids at SLC -- wasn't prepared for a demanding little dude who was ready to protect his turf at all costs.

But Lucy discovered pretty quickly that she was going to have to stand up to the preschooler who liked to push first, ask questions later. And as soon as she did, they both seemed to reach an understanding and suddenly began to appreciate that they had more power together than apart.

As their parents, it's the moments they don't know we're looking, when they make us most proud. 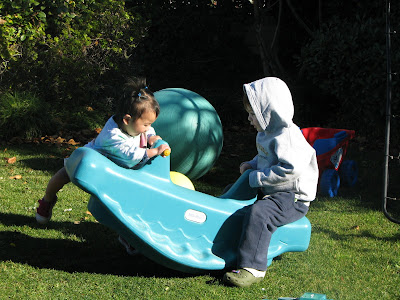 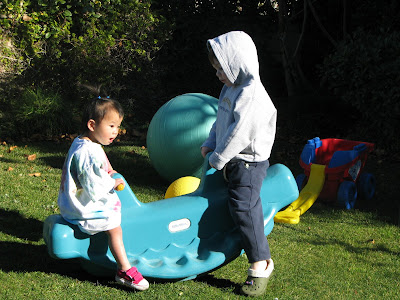 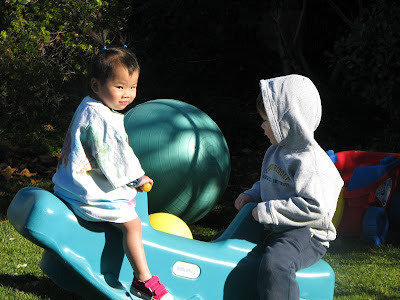 How many years 'til he's begging her to hook him up with one of her friends?

And no, we don't dress Lucy like this. She insisted on wearing this Jacob-made shirt over her clothes.
Whined by JackieMacD at 12:00 AM

This is a beautiful commentary on the unique personalities of your children. I think it's fabulous that you witnessed the way they settled into their roles and found harmony (...most of the time). And, Lucy can wear whatever she wants- she's always gorgeous!

Tisra is right, that girl can pull off anything that she wears! Thank you once again for sharing the everyday, real stuff. You always challenge me to make mental notes for our future adoption. They are both cutie-pies!

Lucy is a doll in that outfit :) I love it :) and the pics are so sweet of them together :) Yup I am sure that he will be beggin her to hook him up with friends quicker than you know it. Time seems to FLY now that they are home doesn't it??

I beg to differ folks, Brady will not be needing Lucy to be "hooked up" with girls, he will be beating them off with a stick just like his brother.

I think you're right, Papa. But Lucy will have that ONE friend who's not charmed by them and THAT will be the girl they go for... isn't that what guys do?

Our youngest boy, Jason, is 16 mos older than Sarah (just like your two!). He was definitely king of the roost before Sarah arrived-- there have been adjustments for both of them-- but now they are "double trouble" and work together in all sorts of mischievious ways. :) My favorite is when they hug each other (without a prompt)! :) Such sweet pictures!

Jackie, you must be talking about one of those "hard to get" types. Bottom line is, if you want your sister to get a detailed update of what you did on your date, go ahead and date her friend. Isn't that what you girls do?

xo back to ya.

Good try taking pics of Jaden and Brady playing together. :-)

Seriously, isn't that too cool? We see the same baby steps here and we live for those moments because then everything is gonna be OK. I'm getting really excited about getting the kids together again.

Your kids are just like mine-my middle son and youngest daughter (from Taiwan as well) are exactly 16 months apart . . . and boy did it take almost a year for them to really like each other, or at least play together nicely.
He was so upset w/ her joining the family b/c now he had some major competition!
Now, they are best friends-play really well together . . . most of the time. :) We still have those "moments," but each day is getting better.
Nicole

I had to laugh about the "No, we don't dress her like this" comment. Big Red insists on wearing nothing but tie dye t-shirts. Since we drive VWs this sends a definite image to our neighbors. I keep expecting some one to ask how much for a dime bag.