Random Thoughts from the ICU 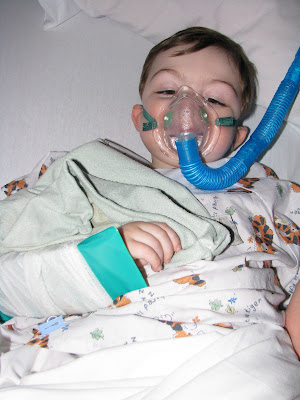 Things are going much better here in the PICU. Brady is back to being his charming self and stopped hitting us and himself -- Albuterol and Bubs... not a good mix.

One thing that's kept us all going over the past few days is a sense of humor. I think I may still have mine due to the 9 hours total sleep over the past three nights and I'm just delirious.

Back to Brady and Albuterol. OMG, I don't even recognize him. He is absolutely hilarious... then completely ticked off and kicking, screaming, incosolable... then he's singing like he's on a Broadway stage... then he's yelling "squeeze!!!!" and planting hugs on me (personally my favorite part). When someone on the hospital staff would come in, he would scream "Bye Bye!" until I told him that he couldn't be rude like that. That's when he determined he could walk the line between cute and impolite by yelling "Sweet Dreams!" instead. 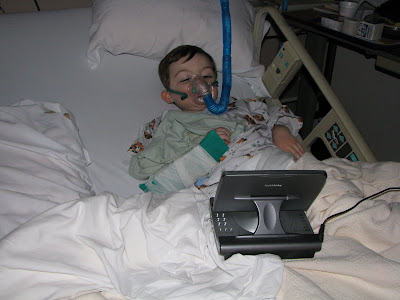 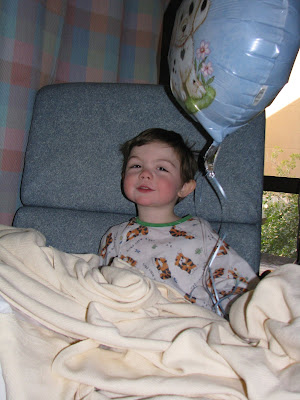 They switched his meds last night and, after a bit of a transition, he was back to being my sweet, resting, funny little man.

Some other thoughts from the ICU:
Friday, when Brady was at his worst, a "fairy" came in to give him a little gift and say hello. I said, "say hello to the fairy, Brady." He yells -- at the top of his lungs -- "I'm NOT a fairy!" Maybe it's one of those you-had-to-be-there moments but it made us chuckle.

Then, he was anxious to talk to his big brother. Here I was, in the ICU holding a phone up to his head, while Jeff was home with Jacob, holding it up to his. I wish I recorded every word but it went something like this:

Brady: Hey Jacob
Jacob: Hi Brady. Are you at the doctor?
Brady: Yeah, Jacob.
Jacob: I miss you Brady.
Brady: I miss you too, Jacob.

Jeff and I both got a little teary listening to our little men. If you ever question whether bringing a sibling home is the best thing... that conversation is proof. (don't worry -- they should be back to fighting over toys in a day or two.) 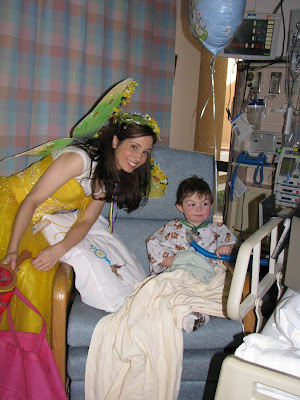 And, although my husband will probably give me a hard time... I will share anyway. We weren't expecting to go from ER to ICU so we weren't really prepared for a few day stay. So Jeff went home to get some important items -- clothes, toys, books, videos, etc. When I opened the bag to see what I could change into (two days of no shower -- yikes!), I saw he had even included my beach cover up. Hey, you never know when you'll find the time to take a swim, right? Thanks honey!

UPDATE: ICU later, Baby! Just minutes ago, they downgraded his status -- and he's officially done with doing ICU time. They pulled off the fun wires coming from his chest and he was able to go for a walk. I will have to post the photos and video later -- it's priceless. He's on fire, yelling down the hall to the doctor to "look at my Lightning McQueen socks!" and we even hit the courtyard where he got some needed air. We couldn't be more proud of his bravery and ability to cope. And yes, I bring my camera to the hospital. This kid is going to love seeing his antics years from now!
Whined by JackieMacD at 11:12 AM

Great news. Glad that he is feeling better. Give him extra hugs and kisses from Grandma and Papa. If there is anything we can do, please let us know.
XO

OMG Jackie!
Had no idea you have been going through this until about 5 minutes ago. I'm so sorry that poor little man has been in distress.
Sending good thoughts and positive vibes your way Lady. Give him a big hug from Allie's Mom.
Take care,
Lora

Hey there - so glad to hear that Brady's been downgraded (funny terminology, really) and done with ICU. Your "had to be there moment about the fairy" made me laugh! And like and Jeff, was teary when I read the "brotherly call" - We sure did miss seeing you guys this weekend. Big hugs to the most adorable patient around! BTW, how was the swim? I knew Southern CA was great, but had no idea the hospitals there were beach-front properties!

Glad to hear he is feeling better!

Continued wishes for a speedy recovery! What a brave kiddo.

I love the line about the socks, that would be priceless!

Working alone this week really has me off my usual blog-reading/FB schedule - don't know how I missed the entirety of this post. It had me cracking up at 5am this morning - not an easy task when the reason I'm up so early is because step's alarm went off 4 TIMES!! The brotherly exchange was so sweet. Not only is it endearing just to hear small guys make conversation on the phone but when they profess love for each other...Yep, we're reminded in the smallest of way that siblings are an incredible gift.

so so so sorry to hear my boyfriend brady hasn't been well.
so glad he's getting better.
Those pictures of him in the hospital are almost to much to bear. you are one strong woman. andrea of momlogic fame.