The Bravest Kid in the World Award goes to 3-year-old Brady this weekend. After an asthma attack came on crazy-quick Thursday night, Jeff and I tag-teamed breathing treatments until we could get him to the doctor early Friday morning. They treated and released him but things just didn't seem to improve. 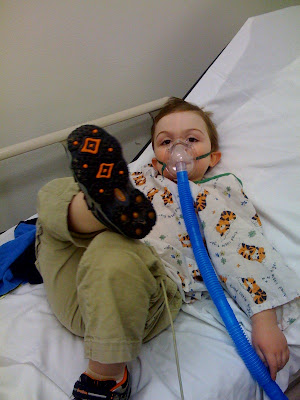 Friday afternoon, we decided to take him to the ER (where this photo is from) after his breathing remained labored with no improvement. Good thing we did because his oxygen levels were down and he needed medication and oxygen immediately and continuously.

Now, we're no strangers to asthma. We've had plenty of experience with it -- including a scare last year when the pediatrician called 9-1-1 because our little B-Man was in respiratory distress. So we weren't overly concerned -- at least no more than we usually are. But I wasn't ready for nurse Mary to say "you've got a sick little dude, he needs to be in the ICU."

Too tired to panic, I listened carefully when she said it was best this way because Brady would get constant care. My mind drifted as I thought back to last March when our then 2-year-old had NO intentions of wearing an oxygen mask or have anyone come within five feet of him. I remember so vividly holding the oxygen over his face all night long until it was back in the normal range and then trying to lie down for the few minutes I had before it would drop again. I would have to then shut off the beeping machine and resume my oxygen-holding position while blocking my body from any kicks or blows my strong toddler would send my way.

While I had the same struggle with the strong, fighting preschooler (my poor Bubbakins had to be sedated in order to help him rest. But you know what? He still kept fighting! Three nurses standing over him were baffled, saying they would've been knocked out themselves in seconds), there came a time in the middle of the night when the nurses finally intervened, telling me they would come in and replace the mask each time he pulled if off and I should get rest. In fact, one nurse demanded I lie down. Since I had only been getting sleep a few minutes at a time for the past two nights, I had no fight left in me and actually listened. I got two glorious hours on the hospital cot. For a minute I thought I had been transported to the Four Seasons.

But the service in this place is pretty amazing. I've had my shares of hospital stays in my day -- waiting for someone to come in to help or trying to get sleep with random people coming in through the night has always been the norm. But here in the ICU? First of all, I don't have to monitor the IV or oxygen. The technology is state of the art. The place is spotless and the nurses are phenomenal. The offers of coffee 24-hours a day and just the attitude and patience of the men and women who work here is astounding. I had no experience with this hospital before but I will definitely make the drive here should we ever need it. Even the ER was an incredibly amazing experience, considering how difficult it was.

But most of all, I think I've been able to keep it together because of the people we have around us. Jeff has been completely in control, getting items from home and making sure Jacob and Lucy are settled. My sister Ellen has been in my shoes -- herself and with kids -- and knows exactly what to say. Michelle and Traci took Jacob and Lucy yesterday on a moment's notice and stayed until the wee hours, and my friend (and sister in law) Pam jumped on a plane from Northern CA to help us throughout the weekend. Never mind the emails and calls from family and friends and all the offers of help -- thank you! It's a reminder of how lucky we are and that our biggest success in life is the quality of people around us.

So why am I blogging from the ICU? Well, I ask myself the same question. But with no ability to reach out to others via phone -- not allowed in the room and I don't want to leave Brady -- this is my way of processing it all.

Email ThisBlogThis!Share to TwitterShare to FacebookShare to Pinterest
Labels: most popular

Awesome post Jackie.
What an incredible little guy you have.
Thinking of you guys.
Sally

Great post! My thoughts are with you and your family! ((HUGS))

My husband works at our hospital, and he always tells me that you want to be in the ICU. Take care of yourself, so you can take care of your sweet family. Prayers are with you.

Oh, honey! Yikes. Sounds like Brady's in great hands, but what a scare. Hang in there! We're thinking of you all!

I hate the asthma thing! We too have been to the ER. I am so sorry. That's sounds so scary. I am glad to hear you are getting top notch treatment in the ICU. I think it's good to blog while there. Gives you something to do rather than watch Cars. Sarah = )

Nothing worse than being blue... I feel for you little dude (from experience). And from a mama's view... I am so sorry about your little guy & take care of yourself too. Hang in there brave little man. My son hates the IV's... he is a wrestler & you must be too... wow, how are you even able to type and spell correctly with your lack of sleep and exhaustion. Get Well Soon and may you be blessed with more glorious sleep. =0)

Jackie all I can say is how much I love you...also I laugh regularly about the short time we were roomates and you had to tell me to put the seat down in the hoppa (how many know what that means)
I always have great thoughts about you......

Sorry Brady is sick. What a brave little man you have though. Thinking of you all and hoping he feels better soon.

Hope your Brady guy gets better soon and you all can get much-needed rest!

Sorry to hear about poor Brady. I will be thinking of you guys.

Awwww... poor little fellow. What a crazy last few days it must have been for you guys. Praying for his recovery (and yours!)

Oh my gosh!!! I am so glad that he is ok... you all are in our thoughts and prayers. And yes he is a brave little man! I so hope that his asthma gets better and these attacks don't happen anymore.. I have asthma and breathing is the one habitual thing we do that is soooo important and when we can't do that freely it is a very scary thing! Poor Guy!

hmmm, wonder where he gets that fighting spirit?? :) praying for you guys & hoping this passes quickly!! B I G hugs!!

It does sound like the staff in the ICU there is phenomenal. Having spent nights in a hospital with my asthmatic daughter, two hours of sleep can indeed be defined as glorious.

Best wishes to your little guy!

Of course B is strong....he has you and Jeff for Parents...Happy he is doing better!!!

praying for you and Brady and the other kiddos who are without mom right now! We just did 4 days in ICU with bobby's mom preceeded by much hospital before and undetermined amount to follow! I UNDERSTAND!

So sorry to hear your sons in the hospital. Hope he has a speedy recovery. I'm glad the hospital is pleasant at least. That can help alot at a time like this.

I'm so sorry! I hope he's doing better soon. It sounds like while not easy to be there it is a good place to be with lots of great people to help and support.

What a brave child! Glad to know he's OK and getting stellar care...you are in my thoughts and prayers!