Tis the Season to Be Rude? 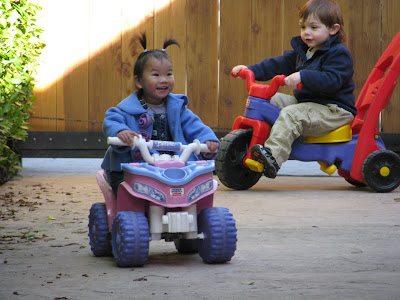 We all know how stressful and rushed the holidays can get. But why is it the impatient and rude people multiply in December?

Today, as Jeff was driving through a mall parking lot -- Lucy and I were along for the ride -- he stopped to let a woman make a left hand turn in front of us. This is not one of those 'she cuts him off and he slows down' moves. This was an actual 'foot on the break, wave her on' moment. She makes her turn with the biggest scowl I've ever seen and absolutely no thanks for my husband's gentlemanly behavior -- no wave, no mouthed thank you. Nada. Nothing. Zilch.
(Hey lady, might want to knock off the nasty face or you'll be looking at a little Botox sooner than you'd like.)

Anyway, this 20 seconds of time was the catalyst for a full-on conversation between Jeff and myself. I grew up in Massachusetts, where they might be crazy drivers, but they always give 'the wave' when another lets them go first or slows down so they can get into the lane. In fact, I always make sure when I change lanes on the freeway not to give the wave too early or else they won't actually see it. I am possibly even guilty for waving too hard and too long. The wave is very important in the land of Massachusetts. Of course they'll also flip you off just as fast if you cut them off but that's another story.

But in California? I get the wave like one out of every twenty times (if that) I yield to another car. Why is that? Is it not in the CA book of etiquette? Now I've lived in this beautiful state for almost 14 years and I have met some of the nicest people I've ever known. So what's up with the general lack of acknowledgment on the road, people?

So what I want to know is... do you do 'the wave'? And is it customary for those who live in your state (or country, for those reading from afar) to give the wave on the roads?

PS: Had to include the photo to show you what adorable and courteous drivers actually look like.
Whined by JackieMacD at 3:52 PM

You're right on with rude drivers in California. I'm constantly badgering Mike to put those mobile cop car lights in our cars so WE can slap 'em on top when WE encounter these rude and often traffic violating drivers. unfortunatley he doesn't trust I'll abstain from using it when he's not present. Wouldn't that be cool, though??

some folks are SOOO rude! jeez!

I ADORE the picture of the kids :) Lucy's hair is getting LONG! so so cute pigtails!

California has nothing on rude drivers. Come to Germany :)

There are SOME people who are nice (usually expats like me) but they will cut you off, make you wish you stayed home and happily climb from their car to tell you what you did wrong. In the middle of the street. Or as I once found out follow you into the parking lot and get out and tell you what a moron you are because you actually could have made that right on red (very much not allowed here usually).

Yep, happened to me. I thought I was going to get mugged with my kids watching while this old man yelled at me. He wasn't even going to the store! He got back in his car and left.

I will say one thing though, the autobahn, that sweet lovely piece of road, is the place to be. Just never spend more than the exact time it takes to pass the slower car in the fast lane. They do go past you at upwards of 90 mph and make no mistake to let you know with horns and lights if you are hindering their progress.

OK well what's funny is here in my little midwestern town, people will actually sit there and wave AT EACH OTHER. Like at a stopsign. We get there at the same time... I wave... she waves... I wave back, "No, you go ahead!"... she waves back... we both start laughing. Then of course, inevitably, you start rolling forward at the same time and laugh again. Seriously, this happens to me all the time. That is small town livin' for you. :)

I couldn't handle the rude drivers and getting cut off. I think I would cry every time I drove (that or my blood pressure would go up to an unhealthy level!) I am such a country girl!

The rudest drivers I have come across were in the Chicago area and WI. I couldn't believe how rude they were when we lived there. I do the wave all the time here in PA and for the most part the other drivers are pretty considerate too.

Yes, here in PA and in NJ and in NY where we have lived, The Wave is all-important. Motorists are notoriously poor drivers, esp. in NJ, but at least they've got The Wave down.

Maybe if all of the readers start to wave, CA will catch on..

of course I do the wave. I am from MA! Love the picture.

I live in Ottawa Canada- we
wave here! Right now
we have a lot of snow and a transit strike so drivers are
very edgy!
I stopped for a schoolbus with
the lights flashing yesterday
and drivers were honking at me
and actually went around me
and sped by the bus with
the lights still flashing!
I had never seen this before!
Grumpy drivers!
By the way I have the same
name as your cute daughter!

I also make sure I make a point to wave extra long and exaggerated. :)

I love that there are wavers all around the country!

Ramona, you and I are going to have to play with the lights when Mike's not looking. But then again, it might be awkward to be busted by your own hubby.

Go Eva! Andrea, remind me not to drive in Germany. Rebecca, LOL!!!! You had me cracking up!

And all you east coasters and Canadians( hi Lucie)-- keep waving. ha. thanks for commenting.

Here in Texas...we not only wave, but then, just in case you missed the wave, we tap our breaks 3 times, to say "thank you", then the person that received the wave/tap combo flashes their brights to say "your welcome". Overkill? Maybe, but we feel obliged to obey the many signs posted along the highway that remind us to "DRIVE FRIENDLY"
P.S. I just found your blog...it's addictive! I can't get enough of you and your beautiful family!! Happy blah blah to all of you!!