While plopping your kid down in front of any TV can get controversial these days, there are a whole bunch of buzz killers who are completely against Baby Einstein, saying that watching could actually lead to delays in children. I'm not really sure of the reasoning because, just to have the time to read the entire article in Time Magazine would require me to put my child in front of a Baby Einstein video. 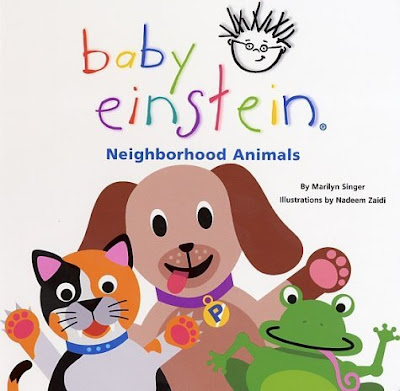 Instead, I conducted my own study -- very scientific -- with three children. 30 minutes of Baby Einstein: Neighborhood Animals allowed me to pour myself a cup of coffee, go through some bills, catch up on email and throw in a load of laundry. There was no wrestling, boys yelling "that's miiiine!" or whining. For 30 whole minutes.

And through it all, Lucy repeated "doggy" each and every time she saw one on the screen. Speech delays, schmeech delays.
Whined by JackieMacD at 12:24 AM

We have 1 of those dvd's but have not used it yet! HUMM maybe Noah would like it. HE LOVES MUSIC! Samuel watches sesame street everyday when he is here and Noah will stop everytime they sing and RUN to the tv!

I'm with you, I have NO problem with a 30 minute learning video...
As a matter of fact, I have another to recommend. My Kiddos LOVED and still lLOVE this one AND they preferred this over my singing the ABC'S to them, LOL!
"they MIGHT BE giants HERE COME the ABC's" Just order it now, you won't be sorry!!! Coen is 5 1/2 and still puts it in and Clayton is the first to stop what he's doing and sit there to watch it with him. Allie dances around and claps her hands and babbles... Simply a SWEET 30 minutes for EVERYONE.

I'm right there with ya! I like to call the characters 'Pixelated Teachers'. Without Diego and Kai-lan, Mikey wouldn't be tri-lingual. :-)

AMEN! We are past the Baby Einstein videos... but, a well placed TiVo'd episode of Dora or Kai-lan sometimes has the magic ability to save my life! What's more, a mother's sanity and ability to re-focus has an EXTREMELY positive effect on parenting.

I read through that article and thought it was dubious at points. For instance, how do they know that kids would've spoken more words had they not been watching t.v. or videos? How do you even begin to prove something like that?

My philosophy is that, when shown in moderation, it's a relaxing time for the kids (whom I believe also need downtime just as much as grownups) and a much-needed breather for the adults. In our household, believe me, tv is a good thing at 5:30 pm because it keeps Scary Mommy from surfacing.

I could not agree with you more. My daughter is now 5 and is no longer watch Baby Einstein, but has graduated to Little Einsteins. I am selective about what and how much my daughter watches. Out of the blue one day when she was 3, she informed me we were listening to Spring by Vivaldi. Sure enough, we were. Since then, she has learned so much about music and art from that little 30 minute show. Why don't they focus on the shows that really are harmful to our kids?