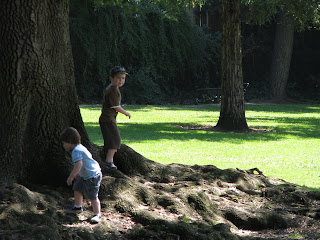 OK, not really. But this is where you learn the true identity of my little men. We've had lots of guesses -- Batman and Joker, BPeanut Butter and Jelly, Ben and Jerry, Jeb and Buster, Charlie (yes, Charlie) and Joren and Bjorn were quite creative -- but a few people actually hit the nail on the head with one or the other...

Watch the video to hear their names.

PS: I have no idea why he mentions a cupcake at the end. It's not like I would EVER bribe my son with baked goods to perform on demand. Weird kid.

Considering Jacob's name was actually the most popular for a few years straight (guess we weren't so original), it's no surprise four people guessed it. Two people with completely different answers actually got B's name right -- one was what we call him (Brady) and the other (Shannon's guess) is his official name (Braeden) -- correct spelling and all.
Whined by JackieMacD at 3:00 PM

Love his voice, and he takes after you! Natural on camera - well, at least when performing for a cupcake, right?! Love it. Tiff

Precious! They are the most adorable little guys!

Look at him... searching your face like... "Was she really serious? Do I get a cupcake?!" Go Jacob Go! Hope you enjoyed the cupcake! You did give him the cupcake right? hehe