UDATE: I found out a few days later that the pumpkin patch we were at on Sunday was actually hit by fire two hours after we left. Unbelievable.

We started the day heading out to the pumpkin patch to pick out the perfect pumpkins to carve for J, B and an honorary one for little sis Lucy. What we weren't prepared for were up-to 100mph winds that kept us from seeing 10 ft in front of us never mind choosing the perfect Jack-o-lantern victim.

Cut to: a few hours later... fire was raging several miles from our house. And the winds weren't helping. Within two hours, the 500 acre fire was up to 10,000 acres. It's only a few short miles from our boys' school. Our hearts and prayers are with those in our community who may be affected by the fire. 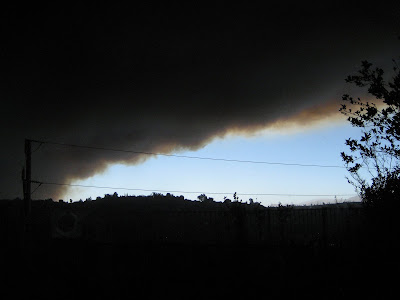 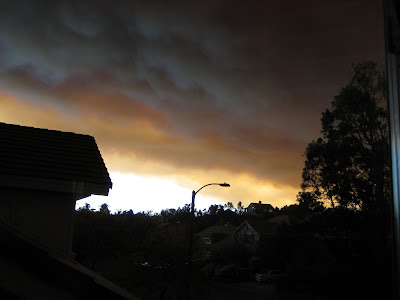 This is the view from our house mid-afternoon before it got really bad.

Then... if you know us prior to this blog... the following won't be much of a surprise. But, if you're just getting to know our family, our beloved Red Sox kicked some serious butt and came back from the brink of elimination to beat Cleveland and head to the WORLD SERIES! The last time they did that was when J was born in 2004. Before that? 1918. So the fact that they're headed to the World Series the year our daughter was born means a lot to us. (and is a good sign) Go Red Sox! Here are the boys celebrating tonight... 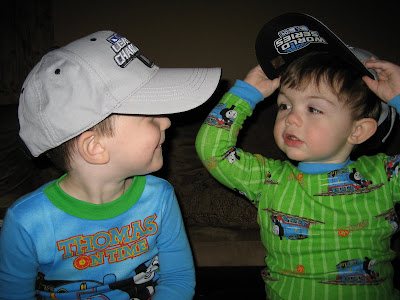 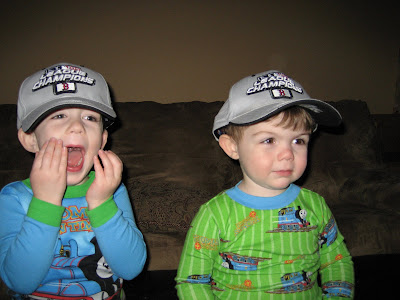 And J in '04 when he was first initiated into the Sox fanclub the night they won their first World Series in 86 years. (He had been to three different Red Sox games in Anaheim, San Franciso and Boston by the time he was two months old.) 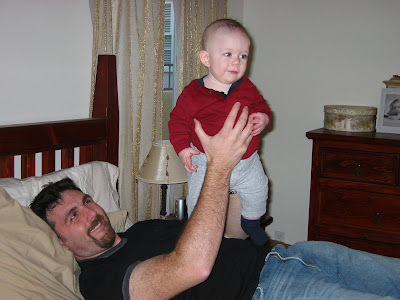 Tonight, the boys got to have a little slumber party downstairs, not to catch the end of the game, but because our upstairs smells like the fire was in our own neighborhood. Poor little B was diagnosed with allergy-induced asthma just this week and the thought of them sleeping and breathing in that smokey smell was not ideal. 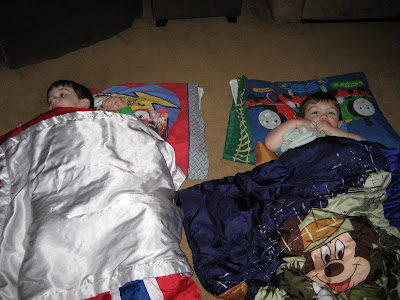 Funny enough - this day is similar to the adoption process. It's emotional one minute, victorious the next. Hmmm... actually sounds a lot like parenting, doesn't it?

Whined by JackieMacD at 9:02 PM

Yes, parenting is definitely a roller coaster with some pretty crazy ups and downs!! What a day, Jackie!! I heard about the fire in CA... my heart goes out to those who were affected by this. I'm glad your house was spared!

We have yet to go to the pumpkin patch for our jack-o-lanterns. I am so bad about getting my holiday things out in advance. Last year we set the pumpkins out ON Halloween!!! Sad but true...

Congrats on your team making it to the World Series!! That was really an amazing comeback!

The boys are such cuties in those hats. ;) The slumber party looks like fun!

Your boys are adorable. That's terrible about the fire and the asthma. We bought a really good air purifier to help with Sierra's allergies and it has actually helped.