On September 13th 2003, Jeff and I were lounging around on a Saturday morning without a care in the world. That was about to change. We discovered that morning that we were pregnant with our first child. Sometimes I wonder how we got through that day. We later hosted an intimate party with 100 or so people at our new home. It was all a blur.

On Tuesday afternoon January 25, 2005 I was home alone with my 8-month-old baby boy when the question "could I be?" was answered by yet another double line. We had hoped our children would be close together but never expected it to be that close!

Those days will forever be etched in my memory as life-changing moments. Sometimes it's still a surprise to me that we've been blessed with these sweet and funny little beings.

One thing those two moments had in common was not only finding out I was pregnant, but sharing the news with Jeff. He was beyond thrilled to hear those three little words. I am pregnant.

I never in a million years imagined he'd have the chance to return the shock and thrill. For months, we discussed "what ifs" and asked "could we" whenever we discussed adoption. But we were never able to say definitively that we were going for it. Until May 13, 2007 - Mother's Day. When I opened the gift my husband so thoughtfully created... 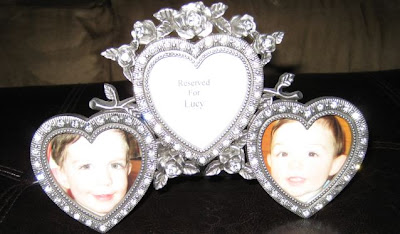 And THAT is the way I found out he wanted another child. I couldn't imagine another human being on the planet with whom I'd rather take this journey.
Whined by JackieMacD at 8:09 PM

Thanks for your sweet comment. I am tired of waiting!! The picture frame is beautiful. What a wonderful gift. I can't wait to see Lucy's picture in it!

Jackie, this was so beautifully written and so sweet! I love the picture frame - and how special that your husband gave it to you on Mother's Day.

Hearing constantly about people's marriages on the rocks and divorce happening left and right, it always touches my heart and encourages me to see love still going strong. :) My husband and I will be married 10 years in just over a week, and I can echo your sentiments - "I couldn't imagine another human being on the planet with whom I'd rather take this journey." That is truly a blessing.

Thanks for sharing your heart and the beautiful photo!

Jackie, the gift from your husband was absolutely precious! And Lucy is beautiful! I think that she and my Matthew look like they could be brother and sister! I am so happy for you and wish you a speedy process!

what a great husband you have. how lucky Lucy will be to have him as her father.

so happy for you.

Have a friend who is leaving in 2 weeks to pick up her baby boy in Taiwan. Any gifts you could suggest we could give her for her trip for her, hubby or baby please?