Every single year, we try to top the last with our holiday card. Since 2002, we've brainstormed, Photoshopped, stuffed, licked, sealed, stamped and mailed what we hope would bring a smile to the faces of our friends and family. It seems we've backed ourselves into a little corner, sending out original (and sometimes humorous) messages each year to family and friends. We often hear "I look forward to your card every year and wonder how you'll top the last."

How do we tell people that it's December 20th and Jeff is just completing the card tonight? It never occurred to us that we may be setting the holiday bar just a bit too high for us to reach, especially when times are tight and time is short. So this year, many of you just might be getting an e-card, one that saves paper, gas and me from heading to the post office. Trust me, no one wants to see me go postal. 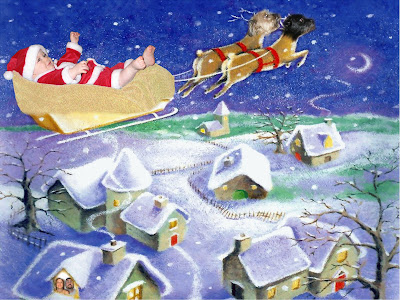 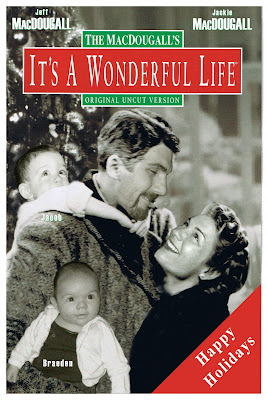 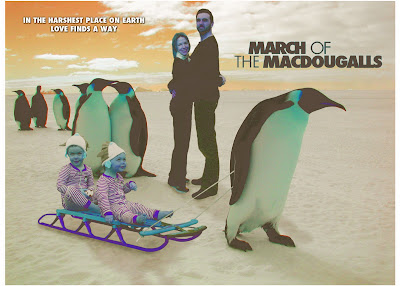 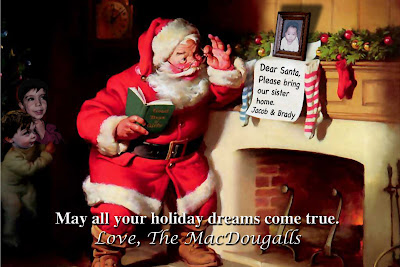 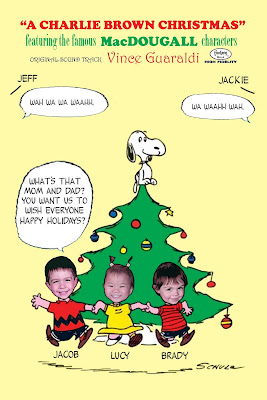 Note: not sure why 2006 turned green when I uploaded it but that's not the way it really looks.

So while Jeff puts the finishing touches on our Happy New Year card (a theme we came up with way before we were running late), I thought I would fill you all in with a holiday letter. Who doesn't love a holiday letter? It's the perfect opportunity to show the world just how brightly our family shines all year long.

Another year has passed. Can you believe it? 2009 began with a pact between Jeff and myself -- NO BIG CHANGES. We had just spent four years having kids, undergoing surgeries, and sucking every penny out of our bank accounts. 2009 was going to be the year to recharge, recoup and revitalize.

Jackie went back to work after a three months work-at-home/maternity leave with Lucy, only to be offered twice as many hours at 2/3 the pay. Hooray! While it seemed like the perfect opportunity, she passed it up, opting to work five times harder with no pay -- for the kids (with some freelance writing on the side). It didn't create any anxiety whatsoever, what with Jeff changing jobs every few months, hopping from gig to gig.

After a brief 3-day ICU visit for Brady's asthma, we spent the beginning of the year continuing to adjust to life as a family of five. We celebrated Lucy's first birthday home with us and discovered that she, too, suffered from asthma, quite possibly due to her premature birth at 30 weeks gestation. Awesome.

As spring arrived, we began thinking summer vacation and booked our annual summer trip to Boston. Just weeks before takeoff, it was discovered that a pipe had burst in the kitchen, creating years of accumulating mold behind the cabinets, forcing us out of the house for six weeks.

The kids enjoyed the summer of transition, first living in a hotel, then an apartment. Jackie and Jeff just loved the lack of structure, difficulty with bedtime and overall stress levels that accompany such an exciting and expensive time. We eventually got back into the house, living for two more months with a kitchen filled with nothing but concrete and damaged walls. But hey, we had a pool (which is key when it's 150 degrees outside).

Lucy began preschool and Brady turned a major corner, realizing that having a little sister on his side was much more enjoyable than messing with her 24/7. Lucy discovered markers and would leave her signature scribble on anything she could find. She also found new and innovative ways to get into her brothers' Legos and sprinkle them around the house, specifically in places bare feet would find them. Jacob began kindergarten and has blossomed into a more-social kid, pulling at hair bows and getting in trouble for squirming in his seat at school.

Our summer-turned-fall vacation was planned and once again, we attempted the trip back east. The day before we boarded the plane, Jeff was passive-aggressively informed that his latest freelance job was, in fact, over. Oh goodie! But that's ok, the foliage was absolutely stunning. We should know. We had such a lovely view of it from the 9th floor of Boston's Children's Hospital where Brady lied (first in the ICU) for four days with pneumonia.

December began with surgery, the removal of a newly-infected gallbladder and a surprise hernia. The kids wondered why Mom's tummy looked like she was about to have another child, sparking Jacob to then regularly (and obsessively) ask for another sibling. Lack of a paying job, fighting with the insurance company and the cost of a brand new kitchen has made us creative; skipping the less important things like date night and trying to keep us from killing each other, instead opting to afford things like food and shelter -- sometimes unsuccessfully.

On December 15th, four years to the day Jeff was laid off from his last long-term job, he was called into his boss' office at his current project. The nice folks at ABC want to keep him around, offering him a position with... wait for it... health insurance and 401k. Jackie's local business made its first dollars and, for the first time in quite some time, things are looking up.

So here we are at the end of 2009, the year of no big changes. We're feeling so relaxed, recharged and revitalized, we can't wait to see what 2010 has in store.

Happy Holidays,
The Mac Five
Whined by JackieMacD at 1:15 PM