The Stranger Who Saved Halloween 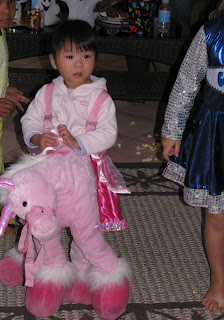 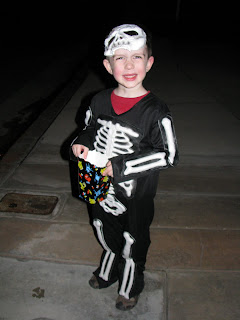 I think I might have the only kids out there who hadn't realized they could choose a new Halloween costume every year. For the past month, whenever someone asked them what they were going to be, Jacob would exclaim "Spiderman," Brady would proudly say "Mr. Incredible," and Lucy would say "candy." Ok, Lucy was much less interested in talking attire and more about the sugar she'd be consuming.

Brady has actually been wearing last year's costume pretty regularly since then. He loves to wear it around the house, sleep in it, even beg to wear it to school (which is where I put the foot firmly down). Over the summer, when we were moving from our house to a hotel to an apartment (I never did show those kitchen before-and-afters did I?), Brady would take the costume wherever we went. It didn't matter that it was 105 degrees, he was Mr. Incredible in all kinds of weather. 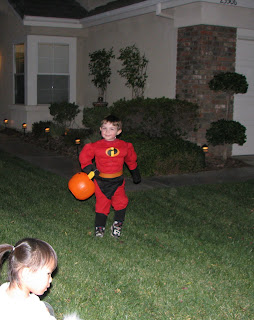 Then, somewhere between the apartment and back home, the costume went missing. I had a vague memory of stashing it somewhere because it was just too hot to be worn. But I couldn't remember where I had put it (see: mom brain). As the days passed and Halloween grew closer, Brady started asking more frequently.

What the heck was I going to do? I looked high and low for that costume, only coming up with a random superhero boot. Where could it have gone?

Last week, I convinced the three kids that it was time to do something amazing and special -- we were going to Target for new costumes. It was so much fun looking through dozens of costumes in every size but theirs to find something new to get excited about. Jacob chose a Star Wars option. Then he changed his mind and picked out something else. Then I tried to get him to be a cool pirate. Then we both agreed on a very fun skeleton costume. Lucy skipped over the princesses (yay!) and chose a unicorn. And Brady... well Brady wanted to be Mr. Incredible.

As I looked through the costumes trying to find something to appease him, I hear a whisper. "Pssst."
I look around but see nothing.
"Hey."
I notice a woman trying to get my attention.
"There are three Incredibles costumes over here in this aisle."

I take a deep breath. I think to myself, "They're probably too big or for babies, I can't get myself excited." I thank her, walk over to check the size and feel victorious. I say "watch this" to the woman and call Brady over, saying "look what this nice lady found." You would've thought Santa just dropped gifts from his sleigh, with reindeers made of gold leaving pepperoni pizza behind. Brady was so excited, all he could do is dance in the aisle.

Related posts: The Future's So Bright
The Kids Are the Treat
Whined by JackieMacD at 10:01 PM