Today was the day, people!

I woke up at 5:30 AM and got my butt into the shower. Of course a certain 2-year-old must have sensed life happening and jumped out of bed to "help" me get ready. I pulled together a variety of workout clothes, another outfit for an interview segment and spent a little extra time on the hair. I couldn't very well go on camera with the half-dry pony tail I wear to drop the kids off at preschool, could I?

I sucked down a half cup of coffee, grabbed my stuff and jumped in the car for the drive to Hollywood. I utilized my multi-tasking skills to apply makeup (during red lights, of course) and kicked myself for not eating something before I left. Eh, it's a shoot, there will be food -- no worries.

As I arrived at the designated parking lot for the very first Nautilus shoot, a black van waited to take me to the stage -- a whopping four blocks away. While I appreciate the thoughtful gesture to take care of the "talent," I couldn't help but chuckle a bit at the irony of all these people doing a weight loss challenge being shuttled such a short distance. Maybe it wasn't that funny, maybe I was just hungry.

As I arrived, I was greeted by the lovely Andy who was responsible for getting everyone where they need to be -- and did it quite well, I must add. First stop... hair and makeup. I love this part! Who wouldn't embrace a little extra glam done at the hands of an artist?

Yeah, that was SO not the case.

In fact, my new friends in hair and makeup pulled my hair back off my face and slapped a pony tail holder around my shoulder-length locks, revealing the "mature colored" hair that was hiding underneath. What the...?

"We want you to look natural."

Next it was off to wardrobe where they chose among the clothes I brought, deciding on a pair of navy capri sweats and a lime green sports bra. Sports bra? Oh right, that's what people wear when they work out. If there's one benefit of mastectomies, it's the burning of the bras. My girls aren't going anywhere. But I'll play along.

After I was all dolled down, it was off to get weighed and measured. Holy cow, Fatman! My new buff trainer grabbed various body parts, pinching them with his caliber. I was suddenly wishing I was at the OB/Gyn in stirrups, feeling like that was probably a little less humiliating than standing there half dressed being felt up with tape measures and body fat calculators. Of course I wasn't so ashamed that I wasn't thinking about getting my hands on a little breakfast. It was then I discovered that the diet. starts. today.

Goodbye wine, goodbye pasta, goodbye ice cream sandwiches. I thought we had a day or two more together but no, our love affair is over. You'd think the loss of my food loves was enough to keep me from chowing down but I was so hungry -- couldn't I just have a little something? I walked over to the craft service table and this is what I saw... 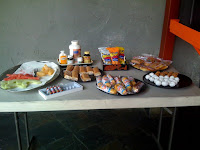 If you've worked in production before, you know there are always snacks calling out to you as you walk by the craft service table. Pastries, donuts, chips and packages of unhealthy treats... the table was filled with crap. I wondered aloud if there was a hidden camera ready to nab one of the challengers dipping into the candy jar. At least that would make sense. Otherwise, you'd think at a shoot for Nautilus there would be a couple of options that didn't clog arteries or send one into a diabetic coma. Just sayin'.

OK back to the shoot. It was finally my turn in the spotlight, and my chance to try out the new machine that's about to change my life (or at least my ass). I was walked over to my friend Mr. Nautilus Machine who was hiding behind a sheet. As he was dramatically unveiled, I thought it looked pretty sleek, simple, nothing I couldn't handle.

Two minutes on this thing and my legs, butt and hips were burning. I might actually lose some real weight here. That is, if I don't keel over and die first.

After my short rendezvous with the machine, I was walked over to a photographer for before photos. Remember the humiliation I suffered at the weighing/measuring station? Yeah, that was nothin'. Having photos taken from the front, profile and rear while standing in sweats and a sports bra -- you haven't lived awkward until that happens.

I lived through the photo shoot and after a brief interview with my new pal, Bill, I wrapped it up. It was off to the grocery store to stock up on low-cal food items and to get started. Day 1 is done. I stuck to my eating plan. The training begins Friday. I can do this.

But I can't do it alone.

Why not take the next 6 weeks and do something you've always wanted to do? Let's put the "us" in Nautilus. What do you say?


Note: I am not being paid to blog about my experience and anything I write is my truthful opinion. For those of you who missed it, I saw an opportunity to be a guinea pig for the new Nautilus machine (not yet on the market) and am now participating in the Nautilus 6-week challenge.