The Suite Life of Jeff and Jackie 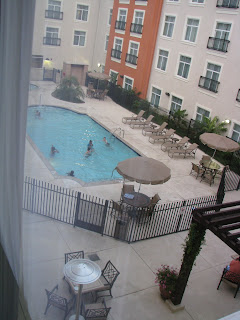 So here we were, late on a Friday afternoon, moving our family of five to a hotel nearby. The kids were pretty psyched with the idea, reflecting back to a few weeks earlier when we drove south to Legoland and stayed overnight. I didn't have the heart to tell them there would be no rides or roller coasters. Little did I know our week would be filled with roller coasters.

We pack up the Hotyssey with clothes and toys and anything else we can think of. It's not like we wanted to drive the whole ten minutes home in case we forgot something. That would just be absurd!

We arrived at our one-bedroom suite and dropped our stuff down. Not bad! Two double beds in one room, a queen size pull out couch in the other... this should do the trick for a couple of nights. The hotel and room were done in an urban feel, like if we used our imaginations, NYC could be just outside our window. Well, not quite. It was a challenge to imagine the city life at our finger tips given we were smack-dab-in-the-middle of our home town's industrial area.

It didn't take long for us to find out we weren't going back home anytime soon. The insurance adjuster called to inform us she had called a relocation service to help us get into an apartment for approximately a month (a month?? what happened to a few days?). She laughed as she guessed five people in a hotel room could get pretty old pretty quick.

Apart from the daily housekeeping (who would randomly show up during a tight window of 9:00 AM and never), we were quickly getting sick of living in such tight quarters -- literally. Sunday night, I prepped the kids for the next day. We had a busy schedule of swimming lessons (which had to be moved from our own pool to the hotel pool), early intervention sessions and the small task of finding an apartment. It appears the relocation service wasn't in such a hurry to help us find something so I needed to take matters into my own hands. I was already losing my mind. It took the kids so long to settle in the hotel every night, instead of counting sheep, I think I began visualizing myself kicking those fluffy ewes over the fence. Finally, after 619 stories, 72 sips of water and 41 different ways of screaming he's kicking me, I drifted off. I was sleeping as soundly as one can when your lower back is throbbing and one of your arms is trapped between your restless body and mattress made of bricks. Suddenly, out of nowhere at 3:30 AM, I heard what sounded like a large animal being wrestled to the ground.

I knew it sounded vaguely familiar but I couldn't place it ... Oh wait a minute... UH OH, is that what I think it is ... OH FOR THE LOVE OF PETE!

My sweet, exhausted hubby had come down with a violent stomach bug. A couple of hours later, Brady was joining him. It was like father/son bonding, praying to the porcelain gods -- not a pretty pair. I searched the shrinking room for anything I thought could be contaminated and dragged Lucy to our mold-filled home to sterilize clothes -- letting her play outside while I ran back and forth from the car to the laundry room.

The sick dudes eventually recovered... but every day seemed to be increasingly more chaotic than the last. I was dealing with the rental process -- which was more involved financially than buying our house -- along with the tiny project of our kitchen be pulled apart piece-by-piece. I juggled all this while simultaneously trying to keep the kids sane, and working on a couple of freelance pieces I had been hired to write. Jeff was told via phone on his sick day that his work hours had just been increased, keeping him away from 8-8 every day. Good times.

Ten days later, with the boys at school and Jeff at work, Lucy and I (and eight bags that had accumulated over the week) were checking out of the hotel... ready for the next leg of our adventure...

Email ThisBlogThis!Share to TwitterShare to FacebookShare to Pinterest
Labels: life

Oh, JACKIE. A month? REALLY? With three littles in a rental? Sigh.

Visiting from SITs, Best Wishes for your move. Wow, with three kiddos and trying to work, Yowzah!!

wow. sounds crazy! Good luck with moving and I hope you get settled in soon! I'm going to read back a bit to get the back story on this.

Just dropped in to welcome you to SITS.

Oh my. . .that surely was "THE" post of the year. . .I can't imagine how you're doing all of this juggling. You need a glass of wine. I don't supose that Hotel of yours has free happy hour???

omg I LOVE the title of your blog! stopping by from SITS and wanted to welcome you to the SITStahood!