Once upon a time, there was a sibling trio -- two boys and a girl. The oldest brother was very smart and quite particular. He liked things a certain way and had no problem letting you know it.

The second brother was quite different. He could charm anyone and could get out of any trouble with just a flash of a grin. He also had quite the temper and you knew when he was ticked off.

Last but not least was the little sister. While you might think she was behaving herself, behind the scenes, she was working her brothers over -- secretly manipulating and scheming.

The siblings had their share of ups and downs and experienced a whole bunch of life together. Eventually they grew up and had families of their own -- the oldest brother had two adorable and funny little boys, the middle brother had a beautiful and smart little girl and her hilarious and sweet little brother, and the little girl ended up... 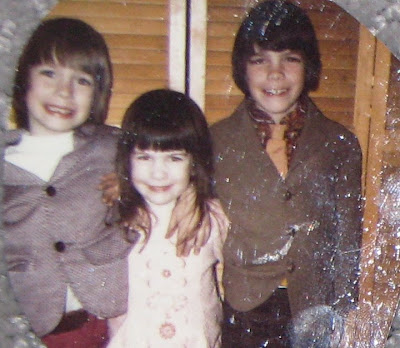 hahahaha I love seeing pictures of all of you when you were little. And yeah, Jacob does look just like you! And in this picture, Tim looks just like little Timmy!