I'm a Loser. And Other Weekend Discoveries.

The word loser... in a word... bugs. It was the insult of choice while I was growing up (just ask my brothers), and as an adult, it's one of the two terms that really feel degrading and mean -- the other one being "pathetic." If you call someone one of these two things... I think it should be assumed you will not be speaking on friendly terms again.

Lately, with help from his pals Chicken Little and Lightning McQueen, Jacob will spout off the loser thing, especially when he's feeling his most competitive. Of course in his brain, a loser is someone who doesn't win -- and he's right. But when he turns to his brother and says "you're NOT a winner, Brady. You're a LOSER" (ala McQueen in Cars), it makes me crazy. Probably just my own issues but I make it clear that's not a cool thing to say. I certainly don't want that one tossed around at school.

Speaking of winning, Jacob's new competitive streak has fired up in recent weeks, mostly with the holiday arrival of his new Wii Cars game. He pretty much only plays it with Daddy or when friends are visiting and they can play together. Well Jake gets CAR-AZY aggressive when it comes to winning.  I don't even recognize him and get upset that he takes playing a game so darn seriously. Hmmm...don't they say we dislike qualities in people that most mirror our own? (cough, cough) Odd, because we're baffled as to where he could've gotten that gene.

But his love of competition isn't just reserved for video games.

Running upstairs for teeth brushing... "I win!"
Upon cleaning his dinner plate before his siblings, "I finished first!"
And getting out to the car and buckling up before his brother and sister... "I did it! You lose!"
(Ok, that one I encourage. It can be hard at times to get three buckled up in car seats!)

Needless to say, I've been working very hard at talking with him on a regular basis, explaining that a person can't always win at everything they do and there will be times he won't be first and it's ok. He acts like he understands... and then whips my butt at something completely defeating me and the purpose. 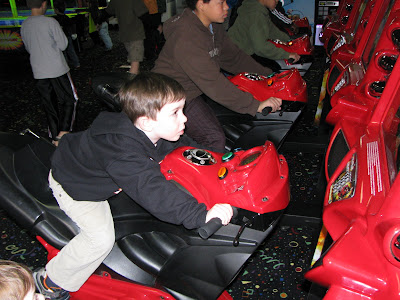 My chance to reiterate the 'sometimes you win, sometimes you lose' lesson appeared when we went to a friend's birthday party, held at one of those places with a room full of video games. I was careful to take the time to prepare him that many of these games were meant for bigger kids and he can't expect to win every time. He rode a motorcycle... drove a car... and seemed to be doing ok. 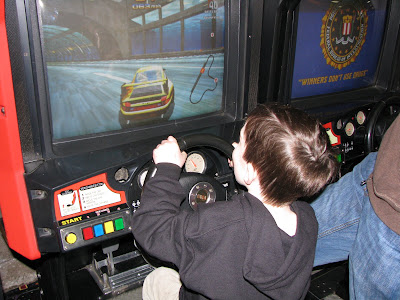 Well when we hit one of those games where you insert the coin and it either falls into the truck, releasing tickets, or missing the truck altogether, and you get nothing...zip...bupkis, I figured he might have a little struggle since who ever wins anything in those games?

So I brace myself as Jacob inserts the token into the slot... 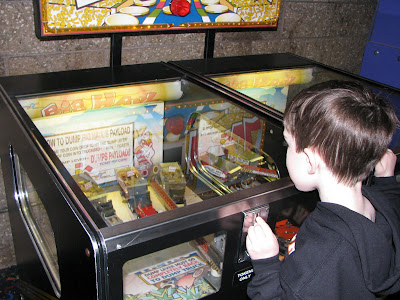 Well would you look at that -- first try, he wins! 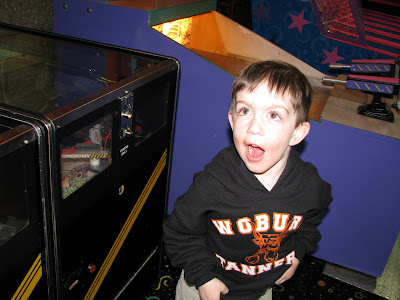 So he tries again... 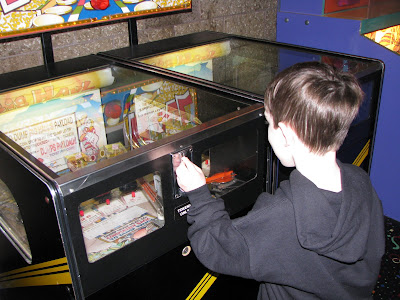 Wow, look at all those tickets! 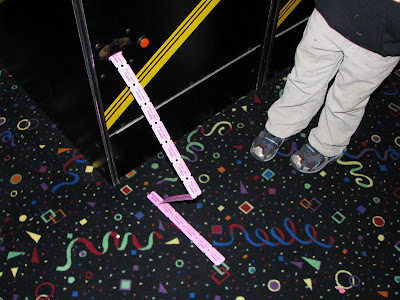 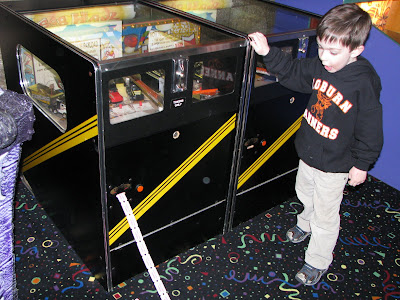 The kid couldn't lose. I would actually think the game was rigged if I didn't completely miss it every time I tried. In 10 minutes or so, he won 215 tickets. (Which he shared with his siblings and they all were able to get the exact same completely useless, choking hazard of a cheap toy.)

If you look closely you can see behind those proud winning eyes, the little monster he's becoming. 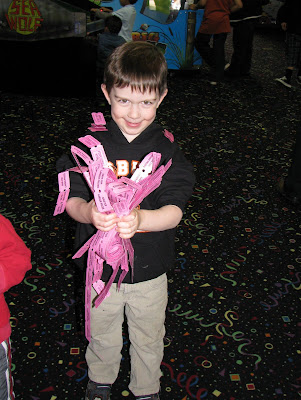 But don't go judging him too harshly. While we were walking in to the party, I heard myself say "first person to see the birthday boy gets to pick first game!"

I guess the overzealous apple doesn't fall far from the tree, does it?
Whined by JackieMacD at 12:00 AM

TOO FUNNY! i am SO competitive...and never played sports or anything, so i don't know where it comes from...my sister is the same way, so it's funny to watch us play wii tennis together, i totally rock....she is getting better though! my husband has to remind us that that wii is for the kids! whatever "dad"! i really enjoy your blog, you are great!

I, too, am competitive. Peyton is turning into a Jacob - is it more common with the first-born???? I'm with you - racing to brush teeth and getting into car seats totally works. Shoot, I even create prizes for the "winner" if need be. Love the happy-evil eye of BOY wins TICKETS.

Ha ha ha! That's a great story. I wonder if it's partly the age? I know that one of the best ways to have Andrew get a move on it is to tell him I'm going to race him. And whuddya know? I usually lose b/c I'm trying to run with a 28 lb. baby in my arms.

Great story! haha! I think its the age because once Bailey started Kindergarten she started that too. Of course pre-Breelyn she had no one to compete with and now that Breelyn is home she has discovered Breelyn doesn't care if she wins or not. I think its a pretty natural thing at Jacob's age. He's growing up though! He looks older all of a sudden!
Holli

Love the post! Now see I think of the term Looser in a totally different way! I WANT you to call me a Looser! because I WANT to loose ALOT of weight. In the weight loss world folks call each other looser and I have been on some groups where they say that so for me its a good term! but I know what you mean! YOu better watch that little intence man! :) heehee
hugs
Tami
Noah's mama
www.tillGodbringsthemhome.blogspot.com

HA hA... this was a great one. I always tell the little ones, "You're first to be second or third... blah blah." I too can't stand the "loser" phrase... it burns. My kids are lucky at those machines where you grab the animals with a claw for a quarter. I can't ever win on those, but for some reason they do! Even when I tell them not to expect it everytime. What can you do?! =0) sara.sofa

LOVE TO SEE HIM WEARING THE WOBURN SWEAT SHIRT!

I am seriously jealous that he won that many tickets!!!! Very cute post!!! I know who I am taking to Vegas with me next time I go!!!

Ha! Very nice post, thanks for sharing the story. I do understand about the competitiveness of kids. My boy seems to be very good at sports instead of those games, but I do know what you mean!

I love the "winning" smile on your sons face! Priceless! He's such a cutie! I have a daughter and a son who is 5 years younger. I made such an effort about fairness and and retelling the the old saying, "It's how you play the game.....". Guess what? They are still VERY competitive. But, I think it's a good trait now when I see how you need it in my job hunting etc!!
vac924@gmail.com

I remember when my boys went through this ,the oldest always wanted to be the winner. Maybe its the fact that they have to share now. Don't forget, never ever give different sizes of dessert!!Life will never be the same. lol

Great post. My older son has always had the need to win. We he was 4, he made my husband play video games over and over until he mastered them by watching, before he would actually play them himself. He won't do anything that he can't do well. When we all sit down to play a family game, I secretly hope that he will win because I know what will happen to his mood if he doesn't. My younger son is so easy going, nothing bothers him.

My 5yr old Dev has quite the competitive streak as well! He wants to be first in everything and has learned that if he "plays" a game with his 1yr old sister he can always win.... just wait till SHE catches on!

So glad you are the featured blogger! Very cute story. I love how we all use things to get our kids to cooperate, even though they are often the very things we hate!

My daughter is actually the total opposite. She is self-sacrificing to the max, giving up toys, food, you name it, if someone else asks. Now I have NO idea where she gets this from, since I myself am known to be ubercompetetive. Then again, my kid's an only child, while I was the last of four.

That last picture was priceless. LOL My daughter tends to be a little sassy and bossy. Not qualities I would want her to have, but she's comes by it honest *ahem*. :)

We're the exact same way...my kids even fight over who gets to get up first in the morning and who gets to give me the first hug. Love your blog, thanks to momlogic and the coffee contest for pointing me toward you.

Hilarious....it is strange how the one quality that is so irritating is found in the mirror!

Just found your blog, and having a fun time reading. Thanks!

Oh my. You struck a note with me in your first paragraph that stuck. I hated those, but the ones that personally affected me were stupid and ignorant. I know at least that ignorant can be used constructively, but the way in which a word is used definitely can make a world of difference. I try really hard to not call my children adjectives.

I love your blog!

I use the work pathetic often lol. Can I borrow your child to scratch some lotter tickets?

Olivia is like that too. She wants to be first in everything. I guess I admire her drive but try to teach her that being first is not the be all and end all.

What a cutie he is! I wonder if it comes with age, my 6 yr old just recently started saying "you'll ruin my life" if we mention any kind of punishment. It makes you wonder how they'll be as adults! I'm pretty competitive myself so I can't be judgemental, I actually encourage it and just caught myself last night when he was playing an online game and I played after him, I wasn't happy that he scored higher than me : )

I hate that my husband is competitive - he never even lets me win when we play Mario Kart. I'm not sure how I will feel when my kids grow up if they have that trait. I don't think I'm that competitive

funny story! I get super competitive too especially with the wii and my man is the same way! I can only hope our kids don't inherit the trait :)

LOL he is just too cute with that evil victory smile! LOL.

Great blog post -- as always I LOVE your blog!!! Have a wonderful day!