This is the very first year the kids are at an age where watching the old classic Christmas shows would be enjoyable. So tonight, we all gathered in front of Rudolph. 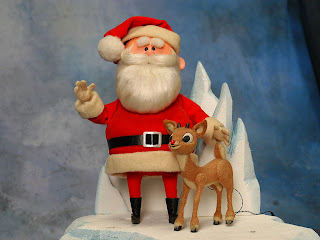 I had no recollection of Santa being such a bigoted blow hard. I am half joking here. His condescension toward poor Rudy, who by no fault of his own was sporting the red honker, is absolutely astounding. Oh but he comes around in the end after finding out the mutant's little freak nose can actually help him out. Classic. In fact, that dude puts the ass in classic. I'm a little reluctant to let him slide down our chimney next week, I must say.

And can we talk about Rudolph's parents? If they were real -- which, I know, is not possible since they're claymation and all -- but, for argument sake, say they were real... they would be so busted by Child Protective Services for being abusive. Forget bagging on the misfit, try focusing on the mistreatment of your own child, Mr. and Mrs. Rudolph's Parents. Treating Rudolph like he's worthless just because of the color of his nose? Behavior like that would get your furry tail kicked in 2008. Watching it felt like an animated Archie Bunker episode.

Come to think of it, so many of the Christmas movies we know and love have such a dark premise. Don't even get me started on that selfish whiner George Bailey.
Whined by JackieMacD at 9:35 PM

Umm- ditto here! We have the "classics" in a box set and I have to say I was also taken aback by the behavior of the characters in those movies and also how much talk there is about "not believing in Santa" in some movies. Hello - please don't ruin it for my preschoolers - thanks much!

HAHA! Your post made me laugh, but you hit the nail right on the head! It's a wonder that any of us grew up to have any decency and couth at all! The Christmas movies aren't the only ones, either! Some of my old favorite cartoons (Bugs Bunny) are LOADED with violence and predjudice among other questionable characteristics! I can watch them as an adult now and find them hilarious, but on the other hand I'm horrified that these shows were watched by millions of children!

Ohhh, i thought the same thing as i was watching it the other day-gosh, Santa was a JERK! :) But, i still love the classic movie-brings back good memories and i didn't really "get it" back then. :)
Nicole