The Long, Cold Journey to...

getting Lucy's first professional picture taken. I'm not sure it should have been so complicated.

I had the boys dressed and ready for school at a record early time. Lucy was all dolled up in her dress, tights, adorable little bracelet she's never worn before...

Jeff got out of bed after a very late night at work and we drove the boys to school -- after scraping frost off our windshield on a beautiful southern California morning (post to come about that). I then realized I had forgotten my cell phone -- the very phone that had the coupon for the photo studio in my text messages. Ok, we have enough time... we'll just drive back home and grab my cell and then to the studio.

Now, we have 45 minutes or so but, being the somewhat annoying perfectionist that I can uh sometimes be, I had decided that Lucy needs shoes to go with her dress (what mother wouldn't want that??) and realized much too late that she didn't have any that were dressy AND brown. And after the hair massacre (read previous post), she could use a cute dressy barrette too. Hey, we're going to the mall anyway, we'll just get those there, right?

Brown, silver or gold shoes in a size 4 and dressy hair clips were no where to be found in Macy's, Brook's shoes, Baby Gap, Pumpkin Patch, Gymboree, J.C. Penney or Sears. Nor could we snag any at one of the (seemingly) hundreds of kiosks. But if you want a shammy cloth thing or hair extensions or -- dare I say it -- facial threading, you'd be all hooked up.

Ok, back to the story. So I run around like a mad woman trying to find the elusive shoe/barrette combo. I ask Jeff what time it is and guess what...

It was appointment time.

At this point I was annoyed and sweaty from running the mall back and forth for 45 minutes. So what did we do?

After trying to hide the non-matching shoes in every pose the photographer would put Lucy in, I did what any mom with an adorable (even without a barrette) little girl would do. I pulled the shoes off... I pulled the tights off... and I plopped her back down barefoot. Hey, we live in California... she can pull that off, right? 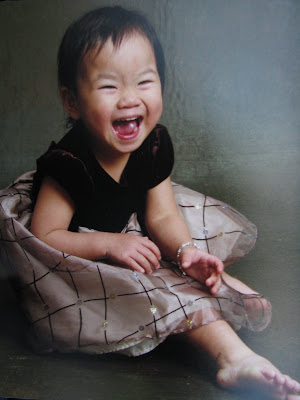 Look at those adorable toes!
Whined by JackieMacD at 6:02 PM

Love that Smile!!!
Love that dress!!!
Love those toes!!!
Love that girl!!!
What a beautiful picture.
We are still waiting for the photographer to send us ours. We ordered Allie's last week and are hoping to get them anyday!
Lora

Oh! Much better with the toes!!! Love it! She looks beautiful and naturally happy.

Jackie,
What is the secret to getting her to wear her bracelet? Allie has 2 and refuses to wear either of them. I mean she tears at them and throws a fit trying to get them off. One is identical to Lucy's and the other one is a tiny bangle style. Did you have to work with Lucy to get her to leave it alone? I'm still not having any luck with hair bows, occasionally a headband/bow, but never a barrette. She loves her shoes though...LOL
Let me know when you get the chance. Thanks
Lora

For all the effort you put into finding shoes, I think the shoeless style you finally settled on was the best. Somehow, it seems to fit her spunky character. Great shot!

Ooooh... love a comment question. Well Lora, the first rule of thumb is to not get cocky when one of the "tricks" works. Because the next minute, it could be the very thing she refuses.

She wanted to pull the bracelet off so I just threw her big bulky coat on and she couldn't get to it as easily. But if she weren't wearing that, I would've waited to put it on her at the last minute. She is obsessed with jewelry, makeup, etc as long as she thinks it's her idea.

The only things she keeps in her hair for a while are the tiny rubber bands for pigtails on the "sumo" as Ramona likes to call it. Barrettes are out lickity split. But I can keep them in her hair for a minute if I distract her quickly after putting it in.

I know I've said it before but I'm shocked at the difference six months can make. Lucy's age and interests run so much older than she is. I think she was kind of their "mascot" at SLC. I watched her eat out of the nannies lunches and I think they probably treated her a bit older than some of the other kids. Because she really has a fascination with all things grownup. In fact, (totally different subject) but I have just recently begun to let go of the disappointment that the court system robbed me from bonding with my baby and I was resentful of all the lost time. Doing better and enjoying Lucy for the stage she's in. She just keeps me busy every second of every day and I don't think I was prepared for that.

anyway, off subject... there are my thoughts.

OH MY GOSH! That is an amazing picture!!! :) Wow. so far I have not been able to get Noah to let me put him down long enough when starngers are around to get a picture but I can't wait! :) LOVE the bare feet :)

She looks beautiful and the bare feet are the best! Years from now, you'll love looking at those little toes. If your mall experience had happened the night before we would have been powering through the stores together. I was looking for the "perfect" boots for Addison. The ballet flats were not cutting it in the rain and 40 degrees. Why is it we're always looking for the perfect item, when they are happiest with bare feet or Hello Kitty rain boots?

Something was going your way....her feet are clean! ;-)

I am in love with this picture and the backstory makes it even more special.

Awwww I Love the story behind this pic, and I love that you took off the shoes! Her toes are precious and her smile is infectious!

Definitely a picture to treasure!

You sure can tell a story!!! We went barefoot too! Photographer said it's very natural for kids to be without their shoes! If you want some cute ones for Christmas, try none other than Target! Or Marshall's! Love the photo of Lucy - she exudes such delight!

YEAH FOR BABY FEET!!! EVERYONE should take baby and kids pics WITHOUT shoes and show those feet....after all feet are only cute for a few years.....the fugetaboutit!! Good for you....who wants to look at kids shoes anyway!!!

Nice shot! She is the first child I have ever seen who looks like she is having a great time having her picture taken.