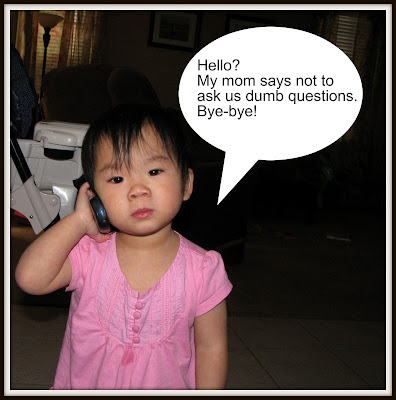 I've heard some pretty clueless stuff during the adoption process and since coming home with Lucy but some just need to be talked about.

A woman in one of my adoption groups -- a thoughtful, generous, loving mother -- was recently berated by a relative when he heard she was having a raffle in order to raise funds for her adoption. Hey, think what you want about fund raising... but he actually questioned her ability to afford to "buy a baby." Are you kidding... buying a baby? I've been known to buy a pair of fabulous boots when I shouldn't... or perhaps a new holiday dress when we're supposed to be spending only on the kids... but, unless a kid comes with a gift receipt, do us all a favor and don't call it "buying babies."

Adoption is not cheap. That's no secret. In fact, many people go into debt, or save for years, or find creative ways to raise the money. Someone recently asked me 'how much Lucy cost' but at that moment, I was able to blow it off. But if we had Lucy biologically or even adopted her at birth, if you were to add up the bills being pregnant, giving birth (with a PPO plan that covers 80%), buying all the necessities a baby needs from birth to 19 mos -- diapers, formula, clothes, mommy & me classes, gas to doctor appointments -- never mind all the things that come up unexpectedly, I think we actually got the better end of the financial bargain. Yes, we provided money but it was money that a non-profit nursery needed after spending thousands taking care of our daughter for a year and a half when no one else could.

I have found over the past few months that I actually have handled the stares, questions and -- sometimes ignorant -- comments better than I expected I would. But, if I could still give those people a bit of advice, I would say... If you think it might be taken the wrong way, it probably will. So take a deep breath, smile and keep walking.
Whined by JackieMacD at 7:11 PM

Thank you hon! This certainly helped me in my emotional snafu. I appreciate your love and support and it felt good to read your thoughts on the ordeal. I am definitely sitting down in the next couple weeks and figuring out some good comebacks just in case... *hugs*. Thank you!!

Oh and Miss Lucy for being the poster cutie for the post! LOL.. You are too cute!! And you tell me baby girl!

I was horrified when I heard about that comment too! Some people just have no sence at all and also no compassion for something that they themselves just dont understand :( UGGGH! Loved haveing a post from you and the pic of Miss Lucy! :) Sure do miss you! I pray y'all are having a wonderful first Christmas Season as The Family 5!!!
hugs
Tami
Noah's mama
www.tillGodbringsthemhome.blogspot.com

Uggh. . .but reality, isnt' it? Thanks for the great post. I'm with you on the "financial" piece - had we had our girls from birth, I can't imagine it would have been any less the cost of the adoption.

I am an adoptive mom and adoption is expensive!! The reality is that our baby did cost a lot!! I am not sure we actual "bought" her, but adopting her sure did cost a lot!!

It is just semantics and it does not bother me. But then again I am one of those people who never says "passed on" instead of "died." I also use actual terminology and very few euphemisms. (ie penis instead of pee-pee, etc...)

Great post! I have already been asked "how much did she cost" about the daughter we haven't even brought home yet. I was so shocked at the way it was said that I didn't have time to come up with a witty comeback. I did, however, say that the fees were not for the child but for paperwork and money goes back to the orphanage and such. It was uncomfortable, but I guess I better get used to those kind of statements. I think if I had time to think of it, I would have said that I'd spend ten times as much to bring our beautiful daughter home and that love has no price.