What a Difference a Year Makes

My 'don't-look-at-me-at-the-wrong-time-or-I'll-throw-myself-on-the-floor' 2-year old is a faint memory. In his place... this kid. I am left shaking my head and grinning at what change to expect over the next year. 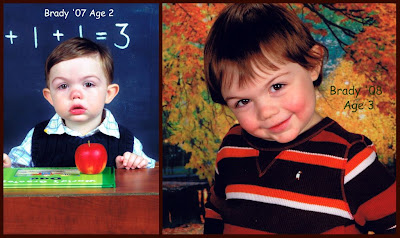 In my little bubbakins' defense, last year's picture was taken his very first day of preschool-- also the very day he turned two. He was nervous, hated having his photo taken, and was none too impressed that we left him there for a whole three hours.

This year, he's a screaming, playful chuckle patch who loves school and singing songs to the rest of us from the comforts of his car seat -- and apparently, thinks he's George Clooney.
Whined by JackieMacD at 7:45 AM

OMG'sh! The kiddo's out there sure do start pre-school early! I'm shocked... Our kiddo's don't start Pre-school until they're 4 years old. Poor Brady looks so bewildered in last years photo... It's hard to believe how much our kids can change and grow in just a year.He sure is a cutie Jackie!!!
I hope our girls stay little for a little awhile longer. If they grow and change that quickly, then I'd opt to keep Lucy home with you and not put her into Pre-school for a couple more years. LOL!
Lora

Not all schools start at that age but I am SO glad I did it when I did. It was the best thing I could've done -- they love it so much and I love how happy it makes them bringing home what they've done and telling me about their morning. Brady looking bewildered isn't as rare as you'd think. haha

If you're lucky Allie will stay little a bit longer but Lucy's six months on her gets her itching to do everything her brothers do. I've realized that my biggest frustration has been trying to parent a baby when all she wants to do is be a big girl!

OMG. I love these pictures! Seriously, you should send Bs latest pic to the Regis & Kelly's Beautiful Baby Contest. It's the last year he can enter and I swear, he'd AT LEAST make it to the top 10 - a free trip to NYC for you. :-)

Just read the previous comments - I cannot wait for J to be of school age. Is that bad to say?

Jackie - Couldn't agree more. I've been finding that Gracyn isn't rejecting us, she really wants to be a big girl (she's got a half year on the others). She does EVERYTHING her Big Brother does. I've even watched her pretend to throw a fit because he was! Oh, and she also jumped off of the couch - luckily my dad caught her. Ramona - it's not a bad thing - nothing wrong with school-aged kids! Peyton loves to bring home his school work and pin it up on the board! It's so cute. BTW - I second Ramona's suggestion - enter that kid into a contest of ANY sort. He is so stinkin' handsome!

Ohmigosh he looks SO CUTE

Both of these pictures are more than adorable. The boy could be a model! I agree with Ramona! These pictures could win a contest. I love both of them but my favorite is actually last years! What a face!

Both of these pictures are more than adorable. The boy could be a model! I agree with Ramona! These pictures could win a contest. I love both of them but my favorite is actually last years! What a face!