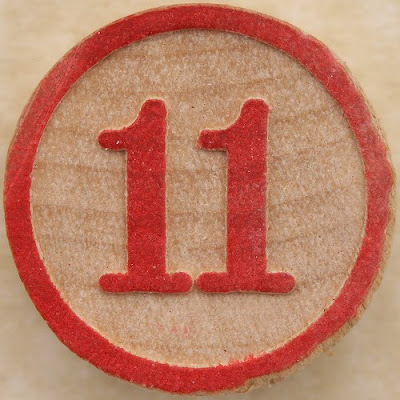 It was (one month shy of) a year ago when we nervously walked into our agency office to see the photo of the baby girl who would become our daughter. While every month after that was met with sadness, this is the last time we will commemorate the month-i-versary with longing.

As you may recall, 11 is, in fact, my lucky number. So it's fitting that we would finally be united as a family after 11 months waiting.

It's also fitting that we become a family of five during September. All my life, September has been symbolic of sadness and loss——not only is it the month my mother was born——it's the month we lost her.

But the month of sadness changed that September in 2003, when I discovered I was pregnant with J. In 2005, it was the month B was born. And in 2007, we received the referral of our little Lucy. Now, we'll all be united in September. I know there's someone up there looking down and saying, "see, stop all the whining——September should be your favorite month."

Speaking of September, something compelled me to open up Lucy's referral file the other day to see when her own biological mother's birthday was. And there it was in black and white——September 5th...the day we leave for Taiwan.

I've learned throughout this journey that there really are no coincidences——just signs that we're moving in the right direction. After all, don't forget this one.

Oh, and get this one... my bro-in-law, Lucy's Godfather, has never been to Taiwan. In fact, I don't know that he ever goes out of the country on business. BUT he's going to be in Taipei on business the exact same time we're there. How crazy is that?
Two weeks from tonight, we're on our way!
Whined by JackieMacD at 7:30 PM

I am so happy that you are finally getting to go get your girl! :) Thrilled I get to meet you but sorry you had to wait so long. I think September is your month girl :)

Sept. 5- unbelievable. You know it gives me chills. Everything happens for a reason. How can anyone doubt it. Yea- 2 weeks!!!

Amazing stuff. It's just more proof in my mind that you were meant to be together, that somehow through space and time, God was working through all the tragedy and loss to bring about something beautiful and redemptive. We'll never see the whole picture on this side of our lives, but one day we'll understand and our jaws will drop even more at all the confluences.

I'm so excited for you guys that THIS is finally the month. Go and get her! We'll be cheering for you all the way.

My heart is overjoyed and I am thanking God that you will finally get to start the REAL journey of being Lucy's PARENTS.

this gives me chills, jackie. so cool

I'm so excited for you and your family... I can't wait for Lucy's to be in your arms again. Also, let me add to the number "11", Eleven is the highest spirtual sign, always been my chosen number. You could'n't said it best, how the signs are there and you know you going in the right direction....

This post is just melts my heart Jackie. I can't believe all that fits together for the month of September for your family. I'm sitting here with my jaw still wide open! Have a great weekend.
Lora
Let's see some of those clothes that you bought last week when you were able to go left instead of right or was that right instead of left. Come on show us some pictures!! LOL

Two weeks and counting. I am so excited!!!! I can't wait to meet her in person!!!! Paige is already for a playdate! I have a bunch of clothes that no longer fit Paige that might fit Lucy. Let me know if you want them!!!!!!

I don't have your e-mail address. But, I got your comment, and I'm happy to share a picture.

PS. thanks for the "young" comment. With three kids, and our fourth on the way, I don't feel super young. In fact, I just bought my first-ever bottle of eye rejuvenation cream at Whole Foods this week! ha!

I can't believe it's been that long. When you are finally home with your little Lucy, people all across the world are going to celebrate in your honor. I can't wait...my glass is ready!!

You have such a numbers connection! Have you ever had numerology done on you?

O.K. 11 months how the heck did you get through that wait! I hope you write a book you truly are an inspiration! Can't wait to see pics of Lucy in The Sky With Diamonds!
Megan