As I've written before, we discovered last fall that B has allergy-induced asthma. We had to give him breathing treatments Thursday night/Friday a.m.—nothing we haven't done before.

When the doctor's office opened, I was on the phone to get him in just to make sure everything was OK. In fact, we were so not worried, that I took J to school while Jeff took B to the doctor and I was going to meet him there in a few minutes. (we usually have to wait 30-60 minutes to be seen—which is a whole other post)

When I got there, B was not only in a room but already being treated. He had gotten sick in the waiting room and I was told, he was very pale and his lips were a shade of blue. What I thought would be a typical office visit suddenly became an emergency.

Jeff and I were told B was in "respiratory distress." They had called an ambulance and he needed to be admitted into the hospital. Our local hospital doesn't have a pediatric ward so we needed to go 30 miles to another one. In the meantime, they didn't think he was in a good position to be in the ambulance that long so we needed to stop at the local hospital's ER to stabilize him.

So off I went in a squealing ambulance with my little man. He was so scared, I'll never forget the look on his little face. Although, as we weaved in and out of traffic with the siren going, I heard a very tiny "woo hoo" come from his mouth and for just a moment, his eyes looked at me like, "whoah Mom, this is cool."

He was admitted and we spent the next 24 hours watching his oxygen levels go up and down—machines that beeped like crazy every time we fell asleep and his deep breathing would make the levels drop—finally getting to a place we can treat him at home. Thankfully he can't read this, but there was a nurse or two* (who were less than helpful) that I'm not all that upset were the target of a B-man tantrum—that kid can kick!

Here he is (via camera phone). 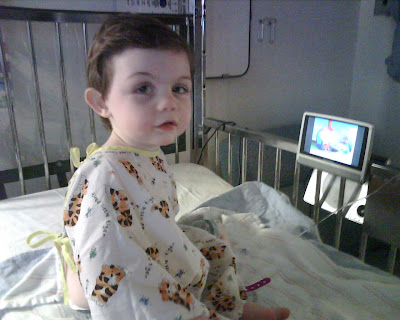 And, in case you're worried about him. Here he is within an hour of being home. His brother fell asleep and he's taunting him! (I only let it happen long enough to snap a pic—bad mom) 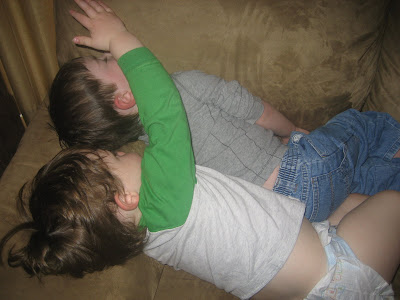 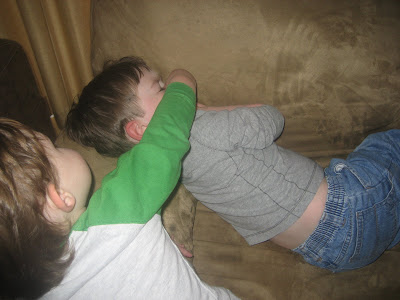 All-in-all, an exciting weekend I'd like to never repeat. And we thought we'd just be going to see the Wiggles. Oh well.

*note to nurse: if you don't want to be called "chunky" yourself, may I suggest you not call my sick son that. It's not cool to tease anyone at any age.
Whined by JackieMacD at 7:32 AM

so happy all is well

Glad to hear that your little guy has recovered. What a scary turn of events.

BTW - the Wiggles have run away with a lot of our $, too.

Jackie I'm so sorry that you all went through that. It must have been so scary for all of you. Our oldest has asthma - seasonal as well but has never had to be at the hospital. HUGS to all of you. I'm glad to see all is well now.

Oh no, Sweet B! What a scare. Happy to hear that he got to come home pretty quickly. Hugs to you, J.

So sorry he, and you, went through such trauma. I can only imagine what it was like with him being so little. My husband has asthma and we went through something similar when Sierra was a baby but he is way bigger and you never worry about anyone like you do about your kids. I hope he never has anything like that happen again. Glad to see he was so fiesty when he got home!

Now I'm off to watch the video.

Poor little guy. I hope he is doing better.

That must have been terrifying! Jason ruptured his eardrum last week due to an ear infection and I thought that was scarey! Im glad he is ok. Looks like he is feeling better.

I'm sure that this was very scary. Glad to hear that he is home and all safe!