Is for my job. I've been fortunate to spend the last two years doing what I love, while helping to pay the bills and still have the flexibility to be here for the kids. Here's a post I wrote today for momlogic.com entitled...

They're Not Animals, They're Siblings

Siblings fight. It's one of those unavoidable things, like death and taxes. So if you're a parent of one kid, remember this: don't judge because God will punish you with another child. 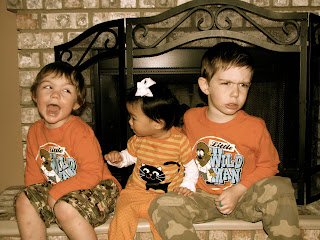 "That's MY bike... get off" is usually followed with someone pushing and the other crying. And when the words "me first" are uttered, you know it's not going to end well. When you're the parent of multiple children, your job as nurturer is replaced with a position as referee.

I have three kids. Pushing, shoving, screaming and crying are commonplace in this house. Sometimes I yell, sometimes I quietly pick them up and drop them into their respective beds, and sometimes I just remember back to when I was growing up and realize that it's totally normal. (Hello, I'm one of thirteen kids -- fighting happened as often as breathing.)

But sometimes, when I'm around someone who only has one child and my kids act up a bit, the look on their face bounces back and forth between "what awful little people'" and "I feel bad for her. She really can't control her kids."

But what those parents don't see: My kids also share, hug, giggle, high-five (spontaneously), invite each other to join them in play, hold hands and love each other like crazy. It's the trade off. I believe the word sibling is actually defined as "the best of friends and worst of enemies."

So the next time you get critical, watching one of my kids push the other down on the playground, know that two minutes later, they'll be pushing each other on the swings. Because that's the way siblings roll.


PS: The momlogic community is gearing up for some amazing new features. If you haven't joined yet, do it here! I'll now be leading the community with new groups, experts, fun stuff and, most importantly, GIVEAWAYS!
Whined by JackieMacD at 1:38 PM

I totally agree on the sibling front. And it is that *passion*- be it the fighting or loving sort- that makes it such a tight bond. Thankfully, as parents, we can just continue to turn them toward each other in childhood so they never leave each other in adulthood. From what I hear, that works most of the time!

As an Only Child, this is my first real experience with sibling rivalry. Once Gracyn can speak up, I'm guessing the fighting might increase. For now, I'm blessed with two that rarely fight. But, you're right. . .it's the moments when you catch them loving on each other that melt your heart.

That's interesting...what you said about parents of onlies. I have one child and I hope I don't come across like that. I always feel empathy b/c I couldn't imagine having to deal with two like Nicholas. I give more credit to moms of multiples and it makes me realize that I need to stop complaining so much about my only one.

Of course I don't mean everyone! There are just as many parents of one who are fantastic... but those who aren't are much more interesting to write about, right? ha.

The other day, one of my three pushed the other and someone I'm not that close to (and who has one) reprimanded him like it was the most evil thing he'd ever seen... kind of over the line, in my opinion.

Oh BOY, do I agree with you!! I can't tell you how many times I have uttered the phrase "best of friends worst of enemies" regarding my boys. And yet, I still want more :)
You are blessed!
Courtney

I definitely hope that one day my daughter will have someone to push, shove, scream and high five with. Hubby and I feel it's important. There are few things in the world that can replicate the relationship of a sibling.