Married Mom of 3 In Search of Her Groove

It was three years ago this month that I underwent my second surgery. Saying goodbye to what one not-so-subtle person called "everything that makes me a woman," I embarked on a new life -- with new perky breasts and let's just say less production in the reproductive department. It was challenging, of course, but I also saw it as a new beginning. Right around the same time, I started walking the hills of our 'hood, pushing two hefty dudes around in the double stroller and taking Pilates twice a week. In six months, I was 30 pounds lighter and stronger than I had ever been. My life's enormous change morphed into an empowering journey, one that encouraged me to live in a way I never had.

Two years later, we were on the verge of traveling to Taiwan to finally bring home our daughter. We had suffered setbacks with her case and the wait was one of the most excruciating times I have ever experienced. A few pounds crept up as I sat night after night reading other adoptive family blogs, comparing our timeline to theirs, guessing when we'd get THE call. At least I had exercise to blow off some steam.

But when Lucy came home ten months ago, I had no idea that along with her arrival would come the departure of me. The double-stroller walks were the first thing to go, Lucy despised being wheeled around. And to leave her at all to do something for me felt selfish, a decision I can see now wasn't necessarily the best for anyone. Pilates became a thing of the past in December when we had to make some tough financial decisions. I can see why it costs so darn much -- it's quite effective! But with three small kids, it felt frivolous. So off it went.

With every passing day, my stress level increased, depression set in, and I had no where to turn with the conflicting feelings swimming around in my head -- except food. With Jeff working nights and feeling utterly exhausted when I finally got the three kids to bed, I would open the refrigerator like it was a movie marquis, trying to decide which feature I was going to dive into that night. Ice cream? An enormous bowl of cereal? More ice cream? I was overwhelmed, lonely and confused... didn't that make me deserving of a little treat? Add holidays and eating off kids plates and things were going downhill quick -- starting with my rump.

I was able to stay at a reasonable weight even though I had put on around eight pounds. But the lack of exercise saw things shifting and I could feel my clothes fitting more tightly. My ability to be bright-eyed and bushy-tailed was more like red-eyed and lumpy-tailed.

Then we discovered the mold.

For five weeks we lived in a hotel and apartment. Jeff was working a zillion hours one day and nothing the next. We were in such a state of instability and insecurity, both at home and work. We had to postpone our annual trip to see my family, which threw me over the edge. Living in a building with a gym was completely pointless, given I couldn't get to it without three kids in tow. Take out was the only meal I was serving and fast food even entered the picture -- FAST FOOD, people! -- something I normally only do on the rare road trip.

Suddenly here I was up 15 pounds, more irritable and upset than ever. How did I become this? My eyebrows haven't been waxed in weeks and my nails... I have to hide my toes, they're so embarrassing. I had completely lost myself in all that's expected of me -- finding a contractor, entertaining the kids, handling the transition again and again, leaving me last on the list of priorities. 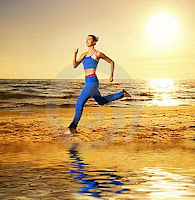 I woke up this morning, laced up my running shoes and hit the street. It felt good to move, breathe and -- best of all -- be alone. Lucy started preschool camp last week (HURRAH - she loves it!) and all of my kids spend three days a week decorating t-shirts, running through sprinklers, and getting dirty in the sandbox. Three whole glorious days that I can work on the exciting new consulting gigs I've landed, get myself back in shape, and do all those glamorous things like grocery shop, pay bills and maybe, just maybe, get those caterpillar-channeling eyebrows waxed.

But I don't want to do it alone! Do you need you get your groove back? Whether it's weight loss, "me" time or getting inspired, join me! Comment here, telling me how you're looking to get life going on the right track. Or follow me on Twitter.com/jackiemacd, we'll use the hash tag #momgroove to keep up on eachother's progress.

Good Gravy Jackie - you mean exercise is the key to weight loss? I just gave birth to Baby #5 3 months ago and every day older she gets is less an opportunity for me to use the ol' "I just had a baby" excuse dadgum it. I curse everyone (mostly of the celebrity nature) who cite "chasing children" and breastfeeding as the reasons why they can wear a thong in public. Chasing 5 kids and breastfeeding just makes me freaking hungry. I'm ready to get my groove back so I'm in. Can you travel to Illinois and kick my fat butt? I'm not sure virtual motivation is enough ;)

I lost my groove too after three kids and becoming enslaved by their constant needs. I started running about 6 months ago and it has changed my life! I have done two 5k's and am signed up for a 10k next week abd GULP a 1/2 marathon in October!! It is such an empowering thing(and the hard bod doesn't hurt either!)
Beth

I'm not a mom yet, but I'm trying to get my groove back too! I was good about exercise my last year of law school, but when I started work this year (and now that I'm moving this fall) I fell off the exercise and eating right bandwagon. But just this week I recommitted myself to getting up in the mornings to run. I'm trying the chirunning method (landing on the forefoot, not on the heels and wearing thin-soled shoes) so my calves are killing me, but I feel better already!

You can do this!

I can't seem to get my groove at all. I had baby #3 last year so i can't say that it's just baby weight anymore. I tried to start walking/running a few weeks back and then my back started hurting. I'm getting help with that. I had all intentions of getting up this morning and starting it all back up and was just too lazy. Now I'm feeling guilty and realizing that I'm never going to lose any weight if I don't get off my ass. My energy is zapped. Please keep us filled in...I really want to jump on your bandwagon and I'm hoping that I don't fall off this time.

I totally get everything you said. It's like you were speakingfor me. In Jan. I adopted two children as well as giving birth. I thought I had it in the bag, But umm... not so much. First of all aside from loving my kids I do not have a domestic bone in my body. So the housework alone keeps me overwhelmed. and I'm sorry to say that food has always been a staple for me. I guess that's why I'm fat. LOL! I am with you on the get my groove back and start exersizing. Really I have no excuse there is a gym at the apartment complex where I live.

YEAH!!! If you EVER want to walk please let me know. We can find a time to do it together!! I REALLY REALLY REALLY need to start walking A LOT more before I do the 3-Day in November!!!

Look at all these groove-getting gals! LOVE IT! Leadia, I am SO with you. Chasing a kid has only made me sweaty and craving chocolate.

3LS. how did you find the time and motivation? Tell us more!

CD, no need to be a mom. We ALL lose our groove along the way. Thanks for joining in!

Stacy, we just have to find something that doesn't feel like so much "work." That's why Pilates was so great for me. I might just have to buy a DVD.

Angela, I've always noticed when I'm feeling down, it's the worst time to try to start. I try and try to change my mindset and the positive behavior follows.

RP Mom, yeah! we can walk the hills!

i still use "it's the baby weight" 3 years later! people just smile and nod :)

I'm wishing I could find my groove too. Having 3 kids in 21 months has definately taken a toll on my body. Luckily, the stretch marks and ponch are usually hidden by clothing, but it doesn't make me feel good to know they are there. Breastfeeding and caring for 3 little ones has helped me lose the pounds but I feel like my body is made of jello. I'd like to get rid of the wiggle and jiggle. I'll come back here for some motivation, thanks Jackie!